Did You Know: Phorid Flies

The phorid fly is also known as the humpback fly and scuttle fly because it has to make a running start before takeoff. The family includes a species known as the coffin fly (Conicera tibialis) and the world’s smallest fly, Euryplatea nanaknihali.

⦁ Phorid flies are often confused with fruit flies (Drosophila) because of their size, but lack the latter’s distinctive red eyes. Phorid flies are characterized by a hump just behind their heads.

⦁ Some phorid flies are useful. The Pseucacteon genus, for example, decapitates fire ants and is being tested as a biocontrol in the southeastern United States. (Editor’s Note: See Pest Trends for more on this phenomenon.)

⦁ Some phorid flies are harmful. In January 2012, for example, a group of researchers connected Apocephalus borealis, a phorid that attacks honeybees, to colony collapse disorder (CCD). 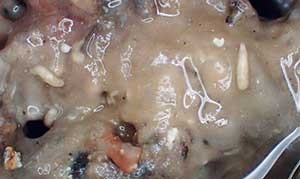 Note the fly larvae of future generations visible in the funk.
Jeff McGovern took both photos in a Florida conference center’s
prep kitchen: “The employees had simply put a plate over the
sink drain to keep them from coming up.” 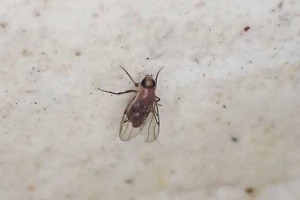 A close-up of a phorid fly, land the funk from which it came. Photo: Jeff McGovern

Tracing the roots of a phorid fly invasion

An interview with a red-eyed fruit fly