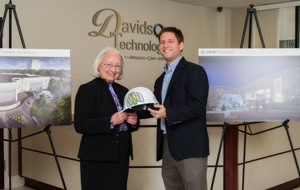 Dorothy Davidson and Brian Cook look forward to a bright future for the Cook Museum of Natural Science.

The Board of Directors of the Cook Museum of Natural Science recently received a $1 million donation from Dorothy Davidson. She is CEO of Davidson Technologies Inc. (DTI), a Huntsville, Ala., technology services company dedicated to providing engineering, technical and management solutions for defense, aerospace and commercial customers.

The museum was founded by PMP Hall of Famer John Cook Sr. (Class of 2015), as an offshoot of Cook’s Pest Control in the late 1960s in Decatur, Ala. It started as Cook’s private collection in the back of his pest management firm’s headquarters, supplementing training for his technicians. The ever-growing collection moved into its own public building in 1980, with an average of 30,000 visitors annually. It is currently constructing a new, 57,000-sq.-ft. building that will open in 2017.

“We are thrilled and honored by this generous gift, which is a significant milestone in the overall capital campaign goal of $17 million,” said Museum Board Chairman Brian Cook, grandson of John Cook Sr., and director of business development for Cook’s Pest Control.

The museum’s outdoor entrance plaza will be named The Davidson Plaza in honor of Davidson, a well-known philanthropist and civic leader in the Tennessee Valley. Davidson expressed her delight in this natural science museum’s ability to engage, excite and educate visitors of all ages, commenting, “This engagement will cause children to consider the sciences as never before. The museum will enhance the quality of life in North Alabama, as well as enhance regional development by attracting hundreds of thousands of visitors to our community.”

“The museum will be an interactive immersion into North American biomes, from deserts to oceans to arctic tundra to hardwood forests,” says Museum Director Schelly Corry. “Instead of isolated exhibits, each exhibit will be part of a narrative explaining how the natural world works.”