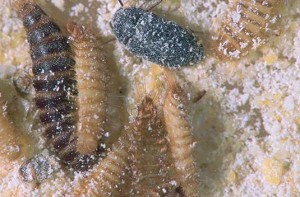 Attagenus unicolor might scramble for new harborage when old carpeting is replaced. Photo: courtesy of, and copyrighted by, Gene White, pmimages@earthlink.ne

Q: A homeowner just purchased new wall-to-wall carpeting, but she’s finding black carpet beetles (Attagenus unicolor) in the carpet, on the stairs and other places in the newly carpeted rooms. The carpeting is nylon, just like the old carpeting, but I don’t think the carpet is the problem. Why have these beetles shown up at the same time and what can I do about them? — Jan S., Colorado

A: Black carpet beetles are scavengers that feed on old lint accumulations and other organic debris under tack boards and behind baseboards. I’d bet their environment was disturbed when the old carpeting was removed and the new carpeting installed. For comparison’s sake: How would you like it if the roof of your house was removed? It explains why the beetles showed up after the new carpeting was installed.
Apply a residual insecticide along baseboards and the carpeting edges. This will kill wandering adults and larvae. Complete control is difficult, though, because you probably can’t reach all of the infestation without drilling walls and injecting a dust.

Q: I have an infestation of Pennsylvania wood cockroaches (Parcoblatta pensylvanica) at a local police station account. The cockroaches are entering police cars, and making officers fear they’ll take the pests home with them. Several trees around the parking lot were removed recently, but that hasn’t helped. There is mulch around the building, but not a lot. Also, there are exterior lights on the building. I haven’t figured out where the cockroaches are coming from, so I don’t know what to treat. Any suggestions? — Robert S., New Jersey

A: Wood roaches are good flyers, so they could be coming from some distance. If a female cockroach is present, males can detect her from hundreds of yards away. Removing trees rarely helps. Treating mulch might help, but in your case, I doubt it. The cockroaches are coming from a distance.
Light management might help. Have the lights turned off one night and see what happens. If the cockroach activity decreases, the station might need to change its lighting. Cockroaches in cars can be vacuumed out. The good news is this problem is most likely temporary. It should resolve itself within a few weeks.

Q: I’m dealing with a rat problem associated with a chicken pen. A customer has about 75 chickens in a large, fenced-in area. There are rat burrows within the pen. The rats are becoming a nuisance because they are wandering away from the pen. Chicken feed is everywhere. I installed bait stations and placed peanut butter-baited traps inside them. The rats have eaten some of the peanut butter and have entered all of the bait stations. Then I set the traps. Nothing happened. No peanut butter was taken and none of the traps were sprung. Any ideas? Should I move the stations around or change the bait? — Jan T., Arkansas

A: I wouldn’t move the stations. Rats avoid changes in their environment, so moving the stations might cause them to avoid the stations. Change the bait. Peanut butter works well for mice, but rats like bacon or fish-flavored cat food. Avocados work too. Your plan is a good one that should catch rats and not pose a hazard to the chickens

Email your questions about insect identification and pest management technologies and techniques to Dr. Doug Mampe, an industry consultant, at dentomol@aol.com. Your questions most likely will be printed and answered in one of Pest Management Professional’s upcoming Ask the Expert columns.