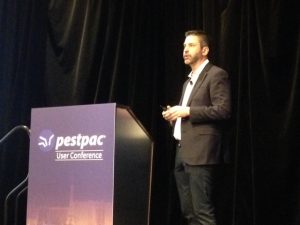 The day began later than most meetings – because let’s face it, you can’t help but stay out late when you’re in Las Vegas – with a well-attended brunch. WorkWave President and CEO Chris Sullens thanked users for attending.

Sullens revealed that in April, the company plans to move to a larger office building located near its current New Jersey headquarters. Also this year, another 50 employees will join the company. He said he is proud of his staff.

He reminded attendees of what his staff accomplished over the past year by revisiting the roadmap discussed at last year’s event. Since 2016 include, he said support hours were extended, the product team expanded, new sales and marketing automation tools were introduced, and fleet management and GPS user interface was improved.

Many of the educational sessions focused on how to get the most out of PestPac. They were well-attended because many of the staff members who helped develop the software’s features demonstrated how to use them.

Danielle Woolley, who has worked at WorkWave 11 years, discussed how to best train staff who will be using the PestPac.

“Training should incorporate as many learning style methods as possible to engage employees and increase retention and duplication of processes,” she said.

Throughout her presentation, Woolley encouraged attendees to ask questions and share tips that work for their companies. Many did just that. For instance, when one user said she offers ride alongs to office staff so they can see what the techs do out in the filed, another user said she requires the techs to sit in the office for a day so they can see how the administrative staff operates.

Webinars and videos are available to train staff as well, and allow those new to the program to learn at their own pace.

“You don’t want to overwhelm your new staff, you want to guide them,” Woolley said.

Also on tap was a Communication Series that covered marketing, service and billing. Customer Success Specialist Alix Rapkowicz explained how to use the information pest management companies already include in the program to generate and send marketing materials, service reminders and notifications, and billing statements.

Malcolm Lewis, senior vice president of marketing solutions, demonstrated the software’s marketing automation component. He presented a real-time look at how to create “drip” campaigns that will enable users to generate new business.

GPS was the topic in the session led by Industry Strategist Andrew de la Chapelle. Knowing what’s going in the field is where GPS comes into play, he said. Attendees learned that taking advantage of all the capabilities GPS has to offer may help lower insurance premiums, slash vehicle expenses, reduce maintenance costs, and improve safety.

But using data to determine which techs are costing the company money isn’t enough, he said.

“You have to enforce it, too. Take the bad drivers off the road. It needs to be an effective solution,” said de la Chapelle. “You need to look at the data and take action.”

Day two of the PestPac User Conference featured a couple of session on the third generation of PestPac Mobile, released that day for Android and iOS. WorkWave’s Joe Baiata demonstrated how the newest version is easier to use. For instance, techs can now add video, photos and voice memos as attachments to update service information. He also showed off text to speech capabilities. He also highlighted more advanced improvements, such as the ability to remotely fill out, review and approve timesheets.

Baiata also led a session on PestPac navigation and usage tips. Because this was a user conference, he encouraged the crowd to share their ideas.

“Feel free to chime in of you have a better way,” he said. “Who knows, the way you’re using it could help somebody else.”

He demonstrated streamlined processes and shortcuts regarding accounting corrections, credit cards and adding dates. He also explained that PestPac is one of the first companies to have TRUSTe privacy certification and stressed the importance of strong passwords. He covered enhancements to calls that, he said, “allow you to treat your call center more like an actual call center.”

Pest Management Professional Contributor and PCO Bookkeepers Managing Director Dan Gordon explained how attendees can use Key Performance Indicators to improve efficiency, productivity, manage expenses and identify areas for revenue growth. He said they can use the data contained in PestPac to run their businesses more efficiently.