Are pharaoh ants leaders of the pack? 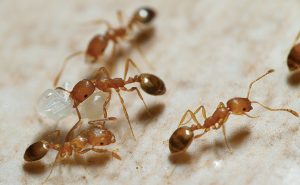 Pest Management Professional (PMP): (looking around) This is a pretty nice kitchen. Have you been here long?

Pharaoh Ant (PA): (rather guarded) Not at all. I hitchhiked here when the owners brought in some vegetables from their garden. As for my colony’s nest, well, that’s really none of your business, is it?

PMP: Gee, I didn’t mean to get too personal…

PA: (hastily) I’m sorry if that sounded rude. It’s just that my family prides itself on being rather clandestine. We often outsmart the professionals when they’re looking for where we’re nesting.

PMP: You guys certainly don’t make it easy. I mean, you forage far from your nests…

PA: We do use established trails, though. Just follow the pheromones!

PMP: Well, we’re not so hip to detecting pheromones as much as the trails that are usually along windowsills, countertops and baseboards indoors, or tree roots and other linear features outdoors.

PA: (nods enthusiastically) Right. And like most ant species, we love moisture sources — sprinklers, air conditioners, things of that nature.

PMP: Er, yes, thanks for elaborating on that! Is there anything you won’t eat?

PA: (shrugs) We have a lot of mouths to feed.

PMP: Yes, I understand your colonies tend to get really large, don’t they?

PA: Absolutely. One colony can get up to hundreds of thousands of workers, with multiple queens. But then we tend to bud, with a queen or two and a group of workers carrying brood — you know, eggs, larvae and pupae — moving away from the original colony and going somewhere else.

PMP: Is that the same as satelliting or fractionating? And does that mean your species is polygynous?

PA: Yes, yes and yes to your fancy entomology talk. Now, as I was saying, some of these new colonies act as a subcolony of the original colony, but others do not. They act as a new colony entirely. This happens naturally, but it also can be a result of some pest guy trying to repel us.

PMP: For such a tiny ant, it’s interesting how active and large your colonies are, yet humans rarely see you interact except when trailing.

PA: It’s true, we try to keep our business to ourselves. Sure some of us have wings, but we don’t fly or swarm. We mate in the nest. And we use geometry in our trails — with forks that make angles between 50 and 60 degrees. Pretty cool, eh?

PMP: You do make professionals up their game, as far as spending weeks or even months to get an infestation under control.

PA: (gasps) Infestation? We prefer to think of it as a colony settlement.

PMP: Fair enough. I’m curious about your stinger — or is that getting too personal again?

PA: No, it’s OK. We’re not an aggressive species, even when encountering an ant from a competing colony. Aside from giving up my nest coordinates, I’m happy to answer just about anything. As for that “stinger” you noticed — it’s really only there to generate pheromones. Except on extremely rare occasions, it won’t hurt anyone.

PMP: Interesting. So how did you get your common name, do you think?

PA: Heh, do you mean sugar ants? That’s kind of a no-brainer. Oh, you probably mean pharaoh ants. Older literature refers to us as “Pharaoh’s ants,” which makes us sound much more sophisticated. But I think it’s mainly because way back when, we were thought to be one of the plagues of ancient Egypt. We were first identified in 1910 and thought to be a native of Africa, so there’s that. But now we’re just about everywhere.

PA: Gosh, I’m not sure. I’d think odorous house ants, rover ants and tawny crazy ants might also be up for that title!