There’s No Winning With DP 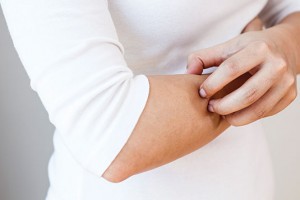 Scabs and scars on the client’s arms aren’t automatically a telltale sign, but could point to DP behavior if there are no pests at the account. Photo: ©istock.com/simarik

Come along with me to an otherwise ordinary new residential account. We’re here because Mrs. Smith is complaining about mysterious bugs in her home, and we need to conduct an initial inspection to determine treatment.

Mrs. Smith meets us at the door. “Oh, I’m so glad you’re here!” she exclaims, as she proceeds to go into graphic (and somewhat uncomfortable) detail about “bugs” boring into her skin and even into her ears and nose while she’s sleeping. She’s scratching her arms intermittently as she takes us around the home, pointing out places where she has experienced the bites. She has scars and scabs all over her forearms, but they are inconsistent with what we would recognize as a bite from a bed bug, mite or other pest. She lets drop that we are the third pest management firm to check out her home, as the others “just didn’t know what they were talking about.”

We do a thorough inspection, yet discover no bugs, biting or otherwise. We leave some monitoring stations in the bedroom and a couple of other possible locales in the home. We go over the customary explanation of what Mrs. Smith should do until our next visit — keep a log of sightings, don’t disturb the monitors, etc. We schedule a follow-up visit, but before we leave, Mrs. Smith presses several prescription bottles in our hands. She says she has collected samples of the bugs themselves before we came.

We breathe a sigh of relief when we’re back in the truck. What was THAT all about? We’re a little afraid to look inside the bottles, but when we do, nothing but some carpet fibers, lint — and ew… some skin flakes or scabs — tumble out.

We’ll know for sure when the monitors confirm it, but the client’s unusual behavior gives us reason to believe this was no ordinary account: Mrs. Smith might be suffering from delusory parasitosis (DP).

For whatever reason, DP, also known as Ekbom’s syndrome, has become so common that nearly all pest management professionals (PMPs) are certain to encounter it sooner or later. The disease is a form of psychosis whose victims have a strong, but delusional (false) belief that their person is infested with insects or mites. They express sensations of bugs crawling, biting or infesting them. Sometimes, accounts worsen over time, from first “feeling” the biting or crawling to actually “seeing” and being able to describe the “bug.”

Such descriptions are usually accompanied by detailed and bizarre behaviors, wherein the “bug” bores in and out, enters the circulatory system, metamorphoses into a strange form (sometimes with wings or with non-insect like abilities of boring into furniture, wood or even porcelain) to evade capture, and then goes back into the person again. PMPs recognize this as an impossibility — that is simply not how insects behave.

Often, the false belief extends to a person’s dwelling as well as their person. This is a variant of DP known as delusory cleptoparasitosis. It is commonly presented with very detailed accounts, and sometimes even accompanied by vast numbers of samples collected from various body regions or sites within the home. The sheer number of samples or sightings without ever producing an insect is often a sign of the disease. Because Mrs. Smith knew the places in her home where she was getting “bitten,” she might also be suffering from this condition.

The belief is so fixed that even if victims are repeatedly told that their samples or their homes contain no insects or mites, or that insects or mites do not behave in the fashion they describe, their belief is not shaken and they will continue to insist the opposite. (Thus, us being the third company to visit Mrs. Smith.)

It is rare that two or more people from a single household suffer from this disorder at the same time, especially considering the tremendous peer pressure that is brought to bear. Even though it’s illogical, the fact that only one member of the residence is afflicted does not convince a person suffering from this psychosis. Multiple opinions from different people also fail to convince. Rest assured that you are only one of many people that this person will contact, looking for validation, if not diagnosis.

How do we handle this?

Ethical PMPs never treat such cases with pesticides because the end result is always the same: no control. You can count on a callback or worse.

It’s time to go back to Mrs. Smith’s house for the follow-up visit. As we expected, nothing unusual was caught in any of the monitors we put out last time. Still, Mrs. Smith is insisting that the problem persists.

“Aren’t you going to do some sort of treatment now?” she pleads, hopefully.

“No, Mrs. Smith,” you say. “We only apply pesticides if we can find a pest present.”

“But you must have missed them! Here are some more I’ve caught,” she says, as she presses even more pill bottles into your hands. “Look at them, you’ll see.”

“The problems you’re describing to us are medical in nature,” you reply, “and you owe it to yourself to consult with a qualified dermatologist for a medical opinion. Will you promise to do that? In the meantime, we can leave our monitors in case a pest does infest your home.”

Mrs. Smith sighs. “That’s what the last exterminator said, too. I guess it wouldn’t hurt to talk to my doctor next.”

While it can be tempting to tell Mrs. Smith that we suspect she has DP, we mustn’t. Having no formal training in either medicine or psychiatry, a PMP cannot diagnose DP. The best that we can do is to make a referral and hope that someone down the line is able to provide the correct diagnosis and — more importantly — facilitate a cure.

DP lies on the fringes of main current psychiatry. Sadly, it is the cause of considerable suffering by many victims. While the insects may not be real, the injury due to loss of quality of life is absolutely real. Sleep deprivation, physical pain, significant expense, mental stress, and social distancing behaviors by the sufferer cause immense harm to the victim, as well as to his or her family.

Ekbom’s syndrome spans across all educational and socio-economical, racial and age classes. It is not uncommon to have a very well spoken or highly successful person suffering from this disease. Experts have made some correlations with past drug misuse, and/or recent personal stress such as the loss of a loved one, a career change, loss of job or even a move. However, little additional research has been published concerning this mental disease.

It is incumbent upon all PMPs to become familiar with the symptoms and signs of this syndrome so that a rational and explicit response is ready. The sooner that it is provided, and distance is placed between the victim and the PMP, the better. Remember that no matter how much sympathy is felt, a PMP will not be able to resolve this problem. Asking for additional samples or enduring long conversations will at best prolong the distress, and at worst validate an actual pest infestation in the victim’s mind.

Having described Ekbom’s syndrome in detail, there are cases that may, at first glance, appear as delusory parasitosis but are, in fact, either illusions of parasitosis or — more rarely — actual parasitosis by very tiny or cryptic arthropods. A pest professional must rule out these possibilities before making any judgments.

Illusions of parasitosis refers to a condition in which dermal sensations are caused by a change in a person’s environment that is incorrectly attributed to insects. Dermatologists know that sensitive people develop itchy or sensitive skin in reaction to substances such as smoke, new carpets, dry air, static electricity, or environmental changes. These sensations can be misinterpreted as being caused by arthropods. However, one of the main differences between illusions of parasitosis and Ekbom’s syndrome is that those suffering from illusions of parasitosis can be reasoned with. With sufficient explanation, they can see and accept the reality of their confusion.

Certain very tiny mites, such as scabies, chiggers, northern fowl or any of several itch mite species, can also infest people or homes. Some hard-to-catch biting insects, such as bed bugs, bat bugs, fleas, lice and springtails, may also afflict people. Keeping these possibilities in mind as you inspect a residence will allow for the possibility of actual parasitosis of tiny or cryptic pests.

Questioning the client is an effective way of corroborating a conclusion. But when patients describe a truly bizarrely behaving insect that they cannot catch, are the only member of the household affected, present many samples and insist a pest is in there somewhere, or refuse to accept an alternative explanation — that’s when your delusory parasitosis suspicions should kick in. —TG

Dr. Timothy Gibb is an entomologist at Purdue University, West Lafayette, Ind. Contact him at gibbs@purdue.edu.

Dr. Gibb is an entomologist with Purdue University, West Lafayette, Ind. Contact him at gibbs@purdue.edu.

Ride Along: The Ins and Outs of a Typical Spider Call