Was the 1918 flu pandemic caused by birds? 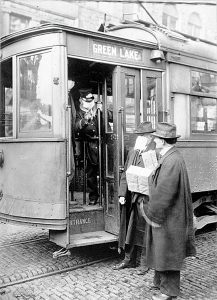 The 1918 influenza pandemic, commonly referred to as the Spanish flu, sprang from North American domestic and wild birds, according to a University of Arizona study published in Nature magazine in 2014. The flu virus was thought to have mutated to pigs, and from there, transmitted to humans. Other studies find that the virus has “shared ancestry” with an equine virus. The fact that horses and mules were a part of everyday life at the time could account for the rapid spread throughout the world. But nearly every study points to avian flu as a factor.

Experts tend to agree that the virus was a mutated form of the H1N1 strain of avian flu, although there’s no way to be 100 percent certain. The pandemic is commonly thought to have started in Fort Riley, Kan. Because of World War I, and the widespread distribution among soldiers and sailors in close quarters and humid environments, the virus spread quickly and steadily worldwide from January 1918 until December 1920.

The virus, which affected about 500 million people worldwide, was responsible for the deaths of an estimated 50 million to 100 million (3 percent to 5 percent) of the world’s population. It is said to have killed more in one year (1918) than the Black Plague killed in a century. In the United States alone, about 28 percent of the population was infected, with a mortality rate of about 15 percent. Scarier still, the hardest-hit population segment was healthy adults between the ages of 20 and 40 — unusual when compared to typical viruses striking infants, the elderly and the immunocompromised at a higher rate.

Studies also have traced the origins of two other pandemics — the Asian flu in 1957 and the Hong Kong flu in 1968 — to an avian influenza virus.