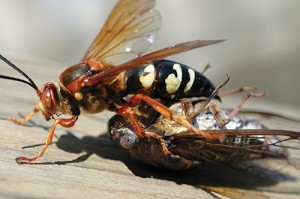 Fiction: There is no such thing as a ground hornet.
Fact: All hornets are wasps, but not all wasps are hornets. True hornets belong to the genus Vespa. Only the European hornet (Vespa crabro germana, an introduced species) in North America qualifies. What is commonly referred to as a “ground hornet” is a giant cicada killer wasp from the genus Sphecius.

Fiction: Hornets can predict the coming winter weather.
Fact: Some people believe that if the hornets build the nest high, the snowfall during the coming winter will be high as well. Some believe the opposite holds true. Hornet nests are only used once and not reused from year to year. The queens hibernate elsewhere until choosing a new site in the spring. Because the nests are all graveyards by the time winter comes, the dead hornets really do not care how high the snow gets.

Fiction: Hornet stings can kill a horse (or a man, etc.)
Fact: Seven stings to kill a horse, three a man and two a child — or so the old German adage goes. As with bees, unless the victim is small, weak or allergic, hornet stings are rarely fatal. Male hornets act aggressively toward intruders, but only the females sting, and only if disturbed or threatened. Unlike bees, female hornets can sting repeatedly.

Fiction: Hornet spray is better than pepper spray for self-defense.
Fact: Misusing a poison is never a good idea. It is a federal offense to use a pesticide in a manner different from what is on the label. This urban legend is dangerous, and it does not work. pmp