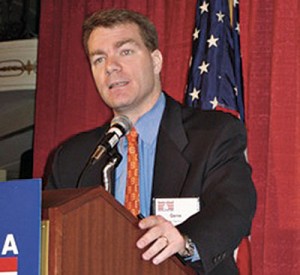 How did you get involved in this industry?

I was working on Capitol Hill and wanted to see what other opportunities might be available to me. In the winter of 1994 I responded to a job listing the National Pest Management Association (NPMA) posted for a manager of government affairs position, and was fortunate enough to make it through the interview and selection process.

I had taken some entomology classes at the University of Maryland and naïvely thought that would give me an upper hand in getting the position. The reality is that I got the job because of a combination of luck and persistence. The important thing, however, is that I am still at NPMA more than 18 years later. Representing the professional pest management industry has been a thoroughly enjoyable experience.

I feel very fortunate and honored to speak for such an essential profession.

Before coming to NPMA, did you have a background in legislative/regulatory activities?

I worked as a legislative correspondent for U.S. Sen. Byron Dorgan (D-N.D.) from 1992-94. I previously interned for then-U.S. Rep. Dorgan, U.S. Sen. Robert Kasten (R-Wis.) and U.S. Rep. Tim Penny (DFL-Minn.). I graduated from the University of Maryland with
a bachelor’s of science degree in journalism and a minor in government and politics.

What additional legislative/regulatory activities do you see for this industry in the near future?

➤ Major label revisions to rodenticide and synthetic pyrethroid products (and some pyrethrin products): There will soon be three different labels of both rodenticide and synthetic pyrethroid products in the marketplace. Consequently, it is more important than ever that technicians closely read the label of the products they use. Managers and owners must continue to stress this point with their technicians.

➤ Pending Endangered Species Act (ESA) litigation that threatens the future use of lawfully registered pesticides: Filed by the activist group Center for Biological Diversity, the so-called “megasuit” seeks to undermine the registration of more than 380 pesticides in 49 states, including all of the rodenticides and many other pesticides commonly used by the industry.

➤ The Pest Elimination Services Transparency & Terminology (PESTT) Act. Under present law, the U.S Department of Agriculture’s Wildlife Services (WS) has the authority to perform almost any vertebrate control job imaginable, except “urban rodent control.” The law does not define the term, however, so the exception is meaningless. The PESTT Act would define the term and direct the Government Accountability Act to write a report identifying services WS performs that the private sector has the capability and capacity to provide, and issue recommendations as to how to avoid WS competing with the private sector in the future.

What do you consider to be the top obstacles facing the pest management industry today?

➤ Bad apples misusing pest control products, thereby undermining the industry’s professionalism and having
a negative impact on its reputation.

What are the industry’s top opportunities?

➤ An ever-growing consumer desire for one-stop shopping ensures the many add-on services many pest management firms are offering will be well received and profitable.

➤ The continued introduction of invasive species.

At a glance: Gene Harrington

Top three industry achievements to date:
➤ Instrumental in developing and helping to implement workable pest management legislation and rulemaking in states from Maine to Alaska, and many in between.
➤ Played a key role in 2000 in the defeat of legislation banning the use of pesticides on various federal properties, and helped make workable a 2009 measure (that ultimately became law in 2012) that otherwise would have made the treatment of pests on planes more difficult.
➤ Helped preserve valuable and widely utilized use patterns for several pesticides.

Jerry Mix was editor/publisher of PMP until his retirement in 2004. Contact Mix, a member of the PMP Hall of Fame (Class of 2005), at jnmix@aol.com.