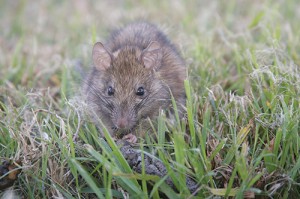 The roof rat is making an unwelcome return to Indiana after more than 165 years. Photo copyrighted by photographer177 / www.fotosearch.com

I did roof rat consulting work recently in Memphis, Tenn., and south Texas. I said to my clients many times: “At least I don’t have to deal with these in Indiana!” But on July 3, 2012, that changed. On that fateful day, I was servicing a large facility adjacent to the Ohio River in Evansville, when I spotted an expired juvenile rat on the floor in a sample room. I thought my eyes were playing tricks on me. No way, I thought. This can’t be happening. I collected the specimen and immediately sent a picture to Drs. Bobby Corrigan (RMC Pest Management) and John Whitaker (Indiana State University) saying, “Tell me this isn’t a roof rat?”

They confirmed it was Rattus rattus.

Exception, or the rule?

After the initial shock wore off, several questions brewed in my mind. Is this part of an established roof rat population or a wayward animal searching for a new home off a southern-based shipping vessel? More importantly, if the population was established, how long has it been established? What’s the extent and severity of the infestation? And the biggest question of all: How is Collins Pest Management prepared to deal with them?

I strongly suspected this was an established roof rat population based on the specimen’s condition and age. Unfortunately, I was correct except for one thing: Not only were roof rats established at this site, they were established at another, similar site a half mile down river.

Subsequent inspections revealed roof rats living in and around each facility. I observed four to five roof rats in utility tunnels beneath one of the facilities.

Those familiar with roof rats are keenly aware of their fondness for traveling along structural elements in the upper areas of buildings. They resemble squirrels in many ways and have an uncanny ability to travel vertical surfaces with relative ease. This and their otherworldly olfactory sense, make them a formidable pest.

We began trapping immediately, and at press time have eliminated more than 20 of them from both sites. We also began baiting roof rats at both sites, although it’s unknown how many have been eliminated through these efforts. Additionally, we’ve trapped at least
10 Norway rats while pursuing roof rats.

The populations seem to be stratified because roof rats occupy the upper areas of the facility, while the Norway rats forage along the lower levels. However, Corrigan suspects temporal relationships might exist between the two species at these specific sites as CPM has only witnessed roof rats during daytime hours — not Norway rats.

Interestingly, both rat species are using the same structural elements for foraging (conduit lines, conveyors, ladder chutes, elevator chases, etc.) and nesting. Nesting sites are yet to be determined because safety considerations hinder nighttime surveys. I strongly suspect hollow block voids in the upper areas of the buildings are the preferred nesting sites of the roof rat.

The vast majority of roof rats have been trapped using snap traps secured to utility lines, especially electrical conduits. Roof rats don’t seem to be responding to baits placed on the snap traps; rather, they’re captured on the traps as they try to bypass them during nighttime feeding forays. Rodenticide acceptance has been minimal, but we’ve found a few dead roof rats after our initial bait placements.

Roof rats are difficult to manage, and eliminating them has been time consuming. We continue to bait and trap at both sites. Additionally, the client has increased sanitation levels and rodent-proofed many entry points, which has helped reduce roof rat populations at both sites.
Roof rat specimens also have been delivered to Whitaker for more analysis in his lab. It will be interesting to see what additional data he can extract from the first substantiated breeding population of roof rats in Indiana since 1845.

Only time will tell how long it will take to eliminate this population. However, I’m certain I’ll never again say to my clients, “At least I don’t have to deal with these in Indiana!”

Roof rats were thought to have been extirpated from Indiana since 1845, with the last known populations reaching as far north as Indianapolis (Whitaker 2010). Historically, biologists blamed the disappearance of roof rats on interspecific competition with the Norway rat. However, modern-day rodentologists question this assumption because there are known, healthy co-existing populations of roof and Norway rats in the United States. Why roof rats have disappeared in certain areas is still a mystery.
Reference:
Whitaker, John O. Mammals of Indiana – A Field Guide. Bloomington and Indianapolis: Indiana University Press, 2010.

Collins is president of Collins Pest Management and a board certified urban and industrial entomologist. Contact him at danc@collinspestmgt.com.