Rollins’ Wilson to be on ‘Undercover Boss’ May 3 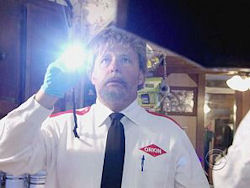 ATLANTA—Rollins’ President and COO John Wilson is going to be featured on CBS’s hit reality television series Undercover Boss, Friday, May 3 (8 p.m. Eastern).  Now in its fourth season, the show follows high-level corporate executives as they go undercover to work anonymously with their company’s frontline employees and gives them the chance to learn more about their company firsthand.

“It was a lot of work and not a lot of sleep as an Orkin Man,” says Wilson. “But it was great getting out into the field to work alongside some top-notch employees on Undercover Boss. I could not be more proud to work for Orkin and lead such a fine group of people.”

Wilson climbed the ranks within the company as a sales inspector, branch manager, region manager, division vice president, division president and president of Orkin before landing in his current role. But, it has been several years since he has had the opportunity to immerse himself in field work, interact with customers and observe employees’ behaviors.

“It is easy to be at company headquarters in Atlanta and say what needs to be done in the field,” says Wilson. “But until I went out there to see firsthand what was working, what wasn’t and how our employees were dealing with their customers, I could not say for sure if what we were doing and implementing for the field was really working.”