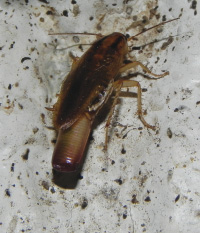 A German cockroach protects its egg cases from various hazards by carrying them.

If a resident leaves out unlimited cockroach food (i.e. dog food, dog feces, spilled food), hoards newspapers and boxes, has dripping faucets, and leaves out water dishes for pets, the number of cockroaches in an apartment can skyrocket quickly — possibly to more than 500,000 cockroaches. Once that carrying capacity is reached and someone mandates an intense cleanup, cockroaches typically will scatter in herds, seeking to relocate in adjacent apartments and outside.

With the exception of Oriental cockroaches (Blatta orientalis), sticky traps often work best to capture these creatures. But don’t count on these traps to eliminate most established populations.

Also, behavioral bait resistance in some cockroach populations can become added incentive to keep sticky traps in place at all accounts.

Cockroaches can trigger asthma. The longer residents live with these pests, the greater the probability they will suffer asthma attacks.

Speaking to a judge in Brooklyn, N.Y., in the late 1990s, Dr. Austin Frishman was surprised to learn the No. 1 reason young children missed school was because of asthmatic attacks.

How can cockroaches be blamed for this? During the molting process, small pieces of the cast skin are produced. These tiny pieces are small and light enough to become airborne. Asthmatic reactions can be triggered in susceptible children and others who inhale the cast skin. Cockroach feces and salivary secretions are problematic, too.

Dr. Frishman recalls being invited to speak at the Albert Einstein College of Medicine in the Bronx borough of New York in 1998. All of the other speakers were medical doctors. His role was to inform the doctors about what to communicate to parents of children with this growing cockroach-related asthma problem. Most significantly, the medical doctors admitted they couldn’t solve the asthma problem with medication. It was an environmental situation that could be corrected only by eliminating the source of the allergens, which was the cockroaches. At the end of his presentation, Dr. Frishman was mobbed by doctors with additional questions.

Also during the 1990s, Paul Bello — who was based in metropolitan Atlanta working as a technical representative for Zeneca Professional Products — recalls a story that ran on the front page in the local newspaper about an infant girl who choked to death after the inadvertent aspiration of a live German cockroach. 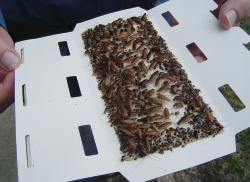 The myriad threats cockroaches pose to public health, combined with their proven longevity and uncanny ability to proliferate, is why these pests rank Public Enemy No. 1 most years. 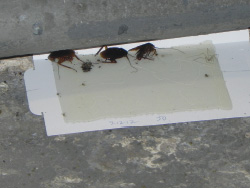 Thankfully, American cockroaches take longer to develop and build large populations compared to German ones. However, there can be a surprising number of American cockroaches present in account locations where infestations are well established. Additionally, while it’s unusual to see a significant number of German cockroaches thriving outdoors, their American counterparts can thrive outdoors and in sewage and waste pipes.

While these two species have commonalities, the way females care for their developing offspring is considerably different. A German cockroach carries her egg case during development; a female American cockroach leaves her egg case behind. Both approaches offer advantages to species survival. Egg cases carried by the female are protected from various hazards, including environmental factors, predators and pesticide residues. While egg capsules deposited and left by females might seem subject to various maladies, American cockroach egg cases often are camouflaged by females when placed, and can be located away from aggregation areas that protect them from control methodologies intended to destroy them. Such egg cases can give rise to additional cockroaches, making an American cockroach infestation much more difficult to eliminate.

No matter which cockroach species infests an account, chances are the customer will be disgusted and at a certain health risk, thanks to these creatures’ biology and behavioral habits. Cockroaches have been implicated in and associated with the transmission of numerous human pathogens and have been suspected as responsible for outbreaks of food poisoning. They’re a serious threat to the health and well-being of customers and require the industry’s best efforts. Fortunately, once we learn cockroaches’ strengths and behavior patterns, we can develop strategies and tactics to win the war.

German cockroaches have basic biological needs. Combine knowledge of these needs and their usual behavior and one can unlock key clues to effective control measures:

BELLO is president of PJB Pest Consulting & Education based in Alpharetta, Ga. He has more than 40 years of industry experience. Learn more at PJBPestConsultant.com.