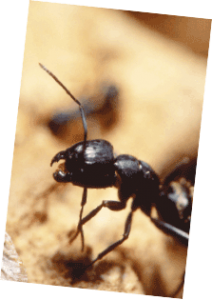 Fact: Carpenter ants don’t eat wood; they excavate it. No matter what kind chemical treatment is used, they remain unaffected because they aren’t ingesting it. Treatment does inhibit fungal development, which makes it less preferable than decayed wood, but treated lumber alone is no deterrent.

Fiction: Carpenter ants in trees should always be destroyed because they kill the tree.

Fact: Leaving a colony (particularly a parent colony) near the outside of a structure creates the potential for future damage in nearby areas. Alternately, carpenter ants clean up decaying and decayed wood, are an important food source for birds and animals, and are predators of defoliating caterpillars. Clearing and trimming areas around structures and foundations, fixing leaks, removing severely decayed trees and buried wood are the first steps toward limiting access.

Fiction: Carpenter ants in houses can always be traced back to excessive moisture.

Fact: Satellite colonies have been found in spaces with new wood and no moisture. The parent colony is more dependent on moisture availability but satellite colonies can be found in areas that are warm and dry.

Fact: The nest isn’t leaving. However, the kids are leaving home to create new parental colonies while the older ants stay put for as long as the resources in the environment support them.

Fiction: Nests are always found near ground level, where the moisture is.