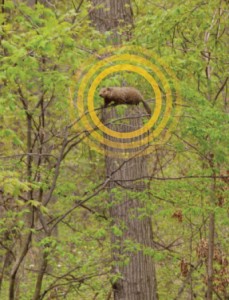 Woodchucks are short, stocky ground squirrels that weigh an average of 5 to 10 lbs. Their dark brown tail contrasts with the light brown fur on their body. Their front feet have long claws that allow them to excavate burrows as long as 66 ft. They have two kinds of den entrances: The main entrance has a porch, which consists of excavated soil pushed out in front of it, and hidden escape holes, which lack the soil porch of the main hole. Entrances range from one for newly constructed dens and as many as five for older dens.

They prefer to live in fields bordered by woods. Human-caused changes in habitat have allowed woodchucks to extend their range westward into the Great Plains. They emerge from hibernation in February or March. Mating occurs in March or April, and females give birth to two to four young 32 days later. Young disperse to find their own homes in July.

Fences provide the best way to protect gardens, sheds and decks. Select half-inch hardware cloth that has been galvanized after the weld. Garden fences should be at least 4 ft. tall and include a 90° bend consisting of a 12-in.-wide apron buried 2 in. below the soil surface and extending outward from the vertical fence. The apron prevents woodchucks from burrowing under the fence. Because woodchucks also climb, one might need to extend the fence higher or add a 45° angle overhang. Use similar principles for protecting decks and sheds. Remind customers this screening will prevent skunks from taking up residence. 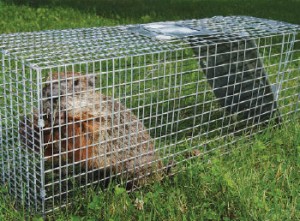 Woodchucks can be trapped in double-door or single-door traps.
Photo: ©iStock.com/EasyBuy4u

Charcoal-sulfur cartridges are registered for use on woodchuck dens away from structures. These cartridges are effective when these three best practices are followed: 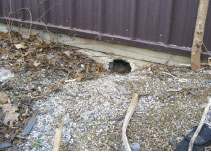 Fumigants frequently fail when the woodchuck isn’t present or when gas concentrations don’t achieve sufficient strength. Gas concentration can be affected by various factors, such as den size, porousness of the soil, failure of the cartridge to burn completely, etc. Fumigation is more effective after a rain because the water fills the gaps in the soil, making the den emit less toxic gas. Rain also reduces fire risk. Remember, woodchucks are tough critters. One trapper bombed a den and three days later, the chucks threw out their dead.

Propane-oxygen exploders are a relatively new tool for use against woodchucks. They pump propane and oxygen into the burrow, which is then detonated. Buy and use safety equipment. Contact your local authorities to ensure the detonation won’t affect natural gas lines, sewers or other underground utilities or objects. Fill times will range from 15 to 60 seconds. Large dens in loamy or sandy soil might require fill times of 90 to 120 seconds. Start at the low end, and monitor jobs to determine average effective fill times in your area. Backfill holes, and monitor for digouts as you would with fumigation. Not all states permit using explosive devices for killing wildlife. While these regulations were intended to stop kids from fishing with pipe bombs, the unintended consequence of these rules prevents the legal use of a legitimate tool. This is another reason why professionals need to join associations to press for rational and science-based regulations for our industry. pmp

Vantassel is a contributor for PMP and can be reached at stephenvantassel@hotmail.com.