It Takes a Village to Raise a Bed Bug

To paraphrase Hillary Clinton, new research shows “it takes a village” to raise a bed bug. 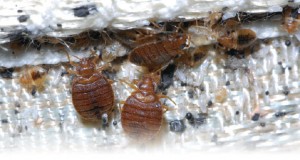 A recent study looked into the question of whether Cimex lectularius nymphs reared in groups develop faster than their solitary counterparts: Do bed bugs mature more quickly when they’re part of a community, or when they strike out on their own? The researchers also examined the effects of group housing (aggregation) on same-age nymphs without any adults around, compared to nymphs reared with adults.

In another, unrelated study, the topic was seasonality. Researchers were hoping that knowing more about the seasonality of bed bugs might help improve current practices used to control and eradicate the bountiful pests.

In the first study, a team from North Carolina State University found bed bug nymphs — similar to other gregarious insects such as crickets, cockroaches and grasshoppers — mature faster in aggregations than solitary nymphs. Their rate of growth was faster by 2.2 days, or 7.3 percent, a significant difference. Aggregated nymphs in the study experienced a lower mortality rate (6 percent) than solitary nymphs (18 percent), but such a difference isn’t deemed considerable.

Researchers didn’t observe any significant difference in development time between males and females in the two groups.
The bed bugs used in the study originated in an infested apartment in Jersey City, N.J., and had been in culture for three years in a laboratory. Researchers selected only recently hatched first instars. Blood was offered three times every week to ensure sufficient access to a bloodmeal. The development time for each gender was measured when nymphs reached adult stage. 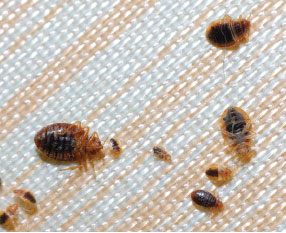 One benefit of group living among bed bugs might be a favorable microenvironment. (Photo courtesy of, and copyrighted by, Gene White, pmimages@earthlink.net)

“Group Living Accelerates Bed Bug (Hemiptera: Cimicidae) Development,” published in the January 2014 issue of the Journal of Medical Entomology, also suggests the growth-related effects of socialization are the same regardless of the ages of the individuals in the group.

Bed bugs live in groups consisting of eggs, nymphs and adults of various ages. The research concluded nymphs don’t need adults around to grow at optimal rates. The nymphs raised in a group of 50 similarly aged bed bugs matured no faster or slower than 50 nymphs raised with 10 adult males, which were used to avoid the problems that eggs (and, therefore, more nymphs) would’ve created. Again, researchers observed no significant difference in development time between males and females.

The failure of the presence of adult males to affect development of the grouped nymphs suggests the effects of grouping are the same, regardless of the age of individuals in the group. Additionally, newly hatched bed bugs don’t need interaction with mature bed bugs for rapid growth, implying development might be independent of horizontally transmitted symbiotic microbes.

Mortality was 20 percent in the group with the adult males versus 12 percent for those grouped exclusively with others their own age. But this, too, is scientifically insignificant. In both groups, the majority of the mortality occurred within the first two weeks, during early-instar development.

The benefits of group living, according to the report, might include “a more favorable microenvironment (e.g., higher humidity and group thermoregulation), access to symbiotic microbes, lower risk of predation and more encounters with mates (Krause and Ruxton 2002). Bed bug communities might have evolved for protection from natural enemies, for improved mating, horizontal transfer of symbionts, nutrients or both, and protection from unfavorable environmental conditions such as low humidity (Benoit et al. 2007, Pinto et al. 2007).

The shortage of predators indoors and the advantage to predators (spiders, for example) of aggregated prey largely deflate the argument favoring predator avoidance as the reason for faster maturation in aggregation. Improved mate-finding is a more likely hypothesis, because bed bugs are wingless and not known to use long-range sexual communication. Aggregation also might be important for providing a moist microclimate because bed bugs are threatened by desiccation at every life stage.

Enhanced rates of development, especially in pest species, might be a response to population challenges and frequent colonization in a highly fragmented environment. The faster development afforded by aggregation might be strongly adaptive for a colonizer species dependent on sexual reproduction: Nymphs need to reach reproductive adult stage quickly.

“When a solitary male or female nymph is the sole colonizer, it would be maladaptive to rapidly reach the adult stage without the prospect of successful reproduction,” say the study’s authors.

The team recognizes more aspects need to be investigated, including how grouping affects particular stages of development; how grouping affects reproduction and mortality of adult bed bugs; the sensory cues that stimulate development in aggregation and their coupling to neuroendocrine mechanisms that accelerate development, and other fitness advantages conferred in aggregations. The study concluded group living can produce a so-called group effect, resulting in morphological, behavioral and physiological changes that can benefit individuals within the aggregation.

This is the first study of the effects of aggregation on bed bug development.

In the second study, University of Pennsylvania researchers are looking for cheaper and more effective ways to eradicate bed bugs. Some findings, published in the Journal of Medical Entomology, examined the matter of seasonality. Scientists focused on four years (2008-2012) of bed bug reports in Philadelphia, mapping the location of each infestation.

From 2008 to 2011, the number of reported cases increased an average of 4.5 percent monthly, which translates to almost 70 percent annually.

So, you might want to reschedule that Cancun vacation you were planning this summer, and make it a Valentine’s Day surprise instead. pmp