Believe it or Not: Flies 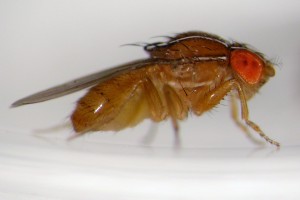 Photo courtesy of University of Wisconsin-Madison.

Fruit flies appear to think before they act and, like humans, take longer to make trickier decisions, according to a recent study published in the journal Science.

In a series of tests, researchers had fruit flies distinguish between ever-closer concentrations of an odor they were trained to avoid. When the concentrations were considerably different, the flies acted quickly to move to the end of a chamber furthest from the strongest smell. But when the odors were quite similar, the flies took much longer to make their movement decisions and made more mistakes.

“Freedom of action from automatic impulses is considered a hallmark of cognition or intelligence. What our findings show is fruit flies have a surprising mental capacity that has previously been unrecognized,” said Gero Miessenbock, a professor with Oxford University’s Centre for Neural Circuits and Behaviour.