In wooded areas, carpenter ants play a dominant role. Man-made structures in these areas will always attract carpenter ants. Main colonies reside in trees, but the satellite colonies, which invade structures, are another story and have several factors working in their favor:

■ Controlled humidity in homes in the winter. This helps maintain moisture for the ants.

■ Hospitable house features. Skylights, spas, and bay windows favor the establishment of carpenter ant nests. Some small species of carpenter ants can live in curtain rods. Hollow doors are like bringing the Trojan horse into an abode.

■ Nearby woodpiles. Homeowners want to stack firewood in their garages or adjacent to their houses, so it doesn’t inconvenience them to bring the wood indoors, but it’s another invitation to enter structures.

Carpenter ant control is challenging because nests can be indoors or outdoors, while foraging continues indoors. If there’s more than one satellite nest in the same structure, the ants might be entering via buried electrical gas lines or tree roots.

There might be no signs of sawdust because the ants select natural voids to nest. There’s no need to create a cavity in wood: Hollow wooden doors, an old toaster, a child’s toy or under an unused doormat will suffice. I once wrapped up a plastic swimming pool cover that was still wet. It was temporarily put in my shed until I had time to dry it out. Seven months later, when I took it out, the carpenter ants had invaded the cover and tore holes in it. I had to purchase a new pool cover.

The trick is finding carpenter ants’ nests. You can increase your chances of success by: 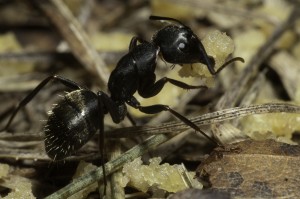 ■ Feeding trailing ants a granular-size material, such as ant bait or wet rice. They’ll pick it up and head directly for their nests.

■ Placing sticky traps with drops of honey around. Wait 24 hours, and see what you catch. The traps with the most ants are closest to the nest.

■ Blowing air under the bottom exterior row of siding. Airflow can prod ants to run.

■ In large rooms with hollow decorative ceiling beams, performing an ultra low-volume (ULV) application with a pyrethrin will flush them out. Make sure the target site and/or pest is on the label.

■ Looking for lines coming to the structure. Once you find the nest(s), use a vacuum cleaner to help solve the problem. Remember, nests in a structure are satellite nests. Ant trails still exist, and within a year, a new nest might be present. A pesticide dust in the old satellite nest area will help prevent new ants from moving in.

Not just a residential pest

Don’t neglect carpenter ants in commercial accounts because they can nest in wooden pallets and contaminate the product on a pallet. In pharmaceutical facilities, that product can be worth more than $100,000. If the ants were to invade the base of a wooden water tower and weaken it, what would happen? Imagine 50,000 gallons of water pouring down into a commercial building, housing $100 million worth of computers, furniture, etc. Ouch! Are you examining roofs regularly?