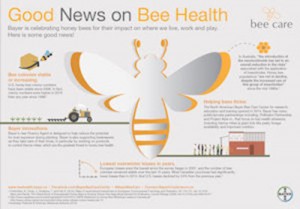 RESEARCH TRIANGLE PARK, N.C.—The Bayer Bee Care Program is celebrating the news that suggests bees are rebounding when compared with previous years. Honey bee populations are stable or increasing globally and new public/private partnerships are addressing forage and nutrition challenges, according to reports. Despite the good news that came out on the recent National Honey Bee Day, bee experts agree that honey bee health is affected by many stressors.

Even with this good news, there remains much work to do as bee experts agree that honey bee health is affected by many stressors.  From a lack of food and heavy workload while being trucked from coast to coast pollinating crops to diseases and deadly pests, honey bees are constantly facing obstacles. There’s even the deadly Varroa mite, which has been called “the single most detrimental pest of honey bees” because it sucks their blood just like a giant tick and can ultimately destroy an entire colony. Honey bees are vital to our agriculture and urban landscapes, and it is important that they stay strong.

Bayer shared the good news about bees during its 2nd Bee Care Tour, which traveled coast-to-coast ending in Washington during National Pollinator Week, and Bayer educated thousands about honey bee health in the middle of Grand Central Station in July.