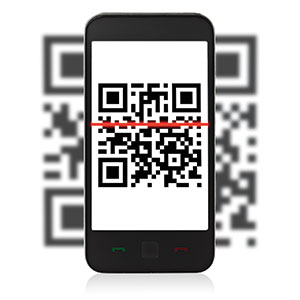 The QR code was expected to replace traditional UPC barcodes because the QR code can hold thousands of characters. Illustration: ©istock.com/pinstock

In the March 2012 issue of this magazine, I wrote about a funny-looking symbol called a quick-response (QR) code. The first QR codes were introduced to Eastern Asian countries in the mid-1990s, but didn’t hit North America until the 2010s. Since then, though, many of us have used these devices to immediately link to websites, upload discount coupons and store data on our handheld devices. Since it’s been a few years since the QR code registered on our collective consumer market radar, I thought it might be an ideal time to see how it’s fared. I also wanted to ask an expert about whether it might overtake the traditional barcode for the collection of data.

At their essence, QR codes and barcodes are symbols that contain embedded data. Although they’re significantly different in their appearances, a QR code, also known as a Data Matrix code, is just a two-dimensional barcode. Originally, it was expected to replace traditional Universal Product Code (UPC) barcodes by offering more information within the same dimensional space. A standard UPC barcode can hold a little more than 20 characters. The QR code can hold thousands of characters. QR codes also can be read by imagers such as smartphones, which means a wider range of scanning devices can collect data other than traditional barcode scanners.

Sounds amazing, right? Then why haven’t QR codes taken over the world? There are a number of theories as to why QR codes have remained in the backseat compared to traditional UPC barcodes. I spoke to Gord Keenan of ScanTrak Data Systems, an industry-leading barcode/QR code applications company, to get his thoughts. It comes down to a general reluctance to adopt and adapt.

“Although QR codes have greater information capacity and can be read by more standard imaging devices, many corporations have invested a large amount of capital into traditional barcode scanning hardware,” Keenan says. “That hardware investment must be taken into account whenever looking at a significant change to any computer system.”

In addition to the corporate market, the consumer market was considered to be a key target of QR codes. Marketers knew these simple images could be embedded with links to websites, coupons, etc., but consumers have taken a long time to grasp this technology. Many consumers still don’t identify with the symbols, thanks to a marginal job of the QR code industry explaining how the codes function. Others who know how the symbols work are concerned about the potential security risks of scanning a symbol that drives your handheld device directly to an unknown website.

Although QR codes are more functional, can be used on more imaging devices and hold more characters, they continue to struggle to establish a foothold in the industry. I understand the reluctance of a company that has already invested capital into systems, hardware and software related to traditional barcoding, but I believe there’s potential for QR codes. My advice to companies just entering the data collection business that want to have the flexibility of using their smartphones as scanning devices is to consider using QR codes as an alternative to traditional barcodes. The data collection investment would cost much less because there’d be no hardware investment.

The future is unclear about which code will rule our service vehicles, but I believe the wide range of devices that can read the QR codes makes them appealing.

You can reach Stanbridge, a PMP and longtime technology columnist, at dean@directlinesales.com.


- Mobile Matters: Saying Farewell with a Look to the Future

- Time for a website makeover?
This article is tagged with Dean Stanbridge and posted in Business