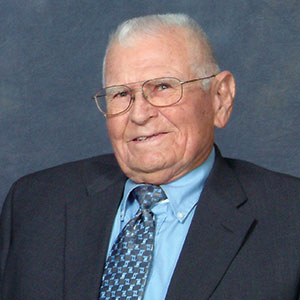 Sapp’s first job in the industry was working for an entomologist at the University of Florida.

If the pest management industry had its own version of Mount Rushmore, Dempsey R. Sapp Sr. would be one of the four on it. The pioneer has been many things: a farmer, typist, WWII veteran, entomologist, pest control operator and business owner.

Born in 1922, Sapp grew up on his family’s farm in New River, Fla. After graduating from high school in 1940, he worked in a local courthouse typing various documents including wills and deeds. He enlisted in the Navy in 1943 and was active in the European and Pacific Theatres. While in the Navy, he enrolled in radio school and communications training after taking a typing test, during which he typed 136 words a minute. The world record at the time was 144.

Sapp enrolled at the University of Florida (UF) with the help of the G.I. Bill. Originally, he wanted to become a lawyer, but he ended up in the entomology field because of financial necessity. One day, his wife, Margie, told him they were going to be parents. That news spurred him to get a better-paying job than the paper route he had. The pest control department on campus was hiring, and the job paid $40 a month. Sapp’s good friend Earl Dixon introduced him to Dr. John Creighton, an entomologist who hired Sapp because of his agricultural background. A year later, a supervisory position that paid $100 a month became available. Creighton asked Sapp to manage the pest control department, but to do so, he first had to take an entomology course, which was taught by Dr. Larry Hetrick, another entomologist. Sapp, took the course, liked it and forgot about law school. He graduated from UF in 1948 with bachelor of science degree.

Into the business
Wanting to start his own business, Sapp earned a master’s degree in entomology from UF in 1949 because he thought it would serve him well. Two days after receiving it, he opened Florida Pest Control & Chemical Co. in Gainesville, Fla., with his business partner, Roy Roig, whom he met in college. Opening a pest control business in September was difficult because winter was nearing and people didn’t think about pest control during that time of year. After the first five months in business, Sapp told his wife he might have to get a different job; but the business improved because of the termite pressure in the spring and the postwar home-building boom.

The industry standard for treating slab construction at the time was to drill on the inside of a structure next to the foundation wall. Pest control operators needed a method to treat interior expansion joints from the outside. Butch Sinclair, a student who worked for Sapp, had a solution. He proposed drilling from the outside wall and using a quarter-inch pipe under the slab to treat the underlying fill dirt and expansion joint. They tried it, and to Sapp’s knowledge, it was the first subterranean termite treatment performed this way.

During the 1950s, the persistent chlordane was the pesticide of choice for termites, and until pests starting showing resistance toward the pesticide, monthly, bimonthly and quarterly treatments weren’t necessary. 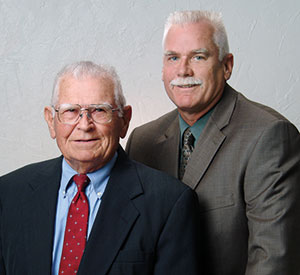 Florida Pest Control’s breakeven point was four years after it started, according to Sapp. His business partner, Roig, wanted to leave the business, and Sapp couldn’t change his mind after talking to him for two hours. Roig parted ways with $10,000 – the worth of his half of the business at the time – and bought a farm.

After surviving its first five years in business, the company grew quickly. The first office included a retail garden store and offered garden supplies. The business grew so fast, Sapp had a difficult time keeping up with expansion. Throughout the years, termite control was about 40 percent of the business. After 40 years, the company became solvent.

“We’d buy a place, move into it, outgrow it, and get a bigger place,” he says.

Today, the company has 20 offices in Florida and more than 500 employees, including graduate entomologists and professional technicians. It’s considered one of the biggest family owned pest management companies in the United States. Even though Sapp retired from active work in 1987, he never really completely retired. He’s board emeritus for the company.

Industry at large
While expanding his company, Sapp was active in the broader pest management industry, particularly with the Florida Pest Control Association (now Florida Pest Management Association). He attended his first association meeting in 1946 while a student at UF, where the association held its meetings. Before 1947, the pest control industry in the state was barely regulated. The association recognized this and sponsored the original Structural Pest Control Act, Chapter 482, which became effective in 1947. For the most part, the industry wasn’t very reputable until it was regulated.

After a decade of involvement with the it, Sapp was elected president of the Florida association in 1958, when he appointed staff to help rewrite Chapter 482. As a result of that work, new legislation was adopted in 1959, the same year Sapp was elected to serve a three-year term on the Structural Pest Control Commission of Florida. With his positions on the commission and the Florida Pest Management Association, Sapp affected a great deal of pest control regulation, some of which is still in effect today.

Recognition
In 1987, the industry started to recognize Sapp’s work. That year he was the recipient of the first Pioneer Award presented by the Florida Pest Management Association.

In 1999, the founder of Florida Pest Control & Chemical Co. gave his alma mater $1 million for an endowed professorship/entomology chair, called the Margie B. and Dempsey R. Sapp Sr. Distinguished Endowed Professorship in Structural Pest Control and Urban Entomology, which is housed in the university’s Institute of Food and Agriculture Services. At the time, it was the first professorship funded exclusively by a pest management professional (PMP). The endowment supports the work of Dr. Phil Koehler, a professor of entomology who oversees UF’s Urban Pest Management Laboratory.

In 2001, the Floridian was recognized by Gamma Sigma Delta, the Honor Society of Agriculture. He also received the Distinguished Alumnus Award from UF in 2005 for his achievements and contributions to the industry, state and students. 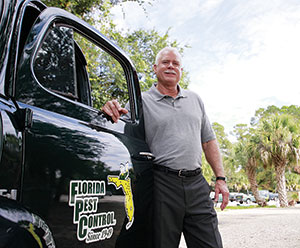 D.R. Sapp Jr. worked his way up the ranks to take over the company his father started in 1949.

Looking back
The biggest change in the industry since Sapp started in it 68 years ago is the continuous change of materials PMPs use.

“The advent of Termidor put us back in the termiticide business,” he says.

Sapp says his son, Dempsey R. Sapp Jr., has done an excellent job taking over and running the company, which he did 22 years ago.

“I always wanted him to go into the business, but it can be a big mistake forcing people to do something they don’t want to do,” the elder Sapp says. “He worked his way up the ranks.”

Nowadays, the 92-year-old lives on his farm in Bradford County, Fla. On many an afternoon, one can find him relaxing under the gazebo by his pool, occasionally taking calls from reporters asking about his life.

You can reach Walsh, a PMP contributor, at jwalsheditor@gmail.com.