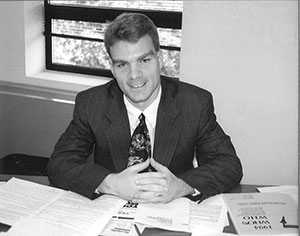 A newly hired Gene Harrington at his desk in 1994.

Gene Harrington wanted to become a journalist, then a lawyer. For the industry’s sake, though, we’re glad he didn’t. The vice president of government affairs for the National Pest Management Association (NPMA) is the main reason why pest management professionals (PMPs) can still apply sulfuryl fluoride.

Harrington was behind the legislative triumph when he successfully lobbied Congress to include language in the recently enacted 2014 Farm Bill, which preserves the food uses for the fumigant sulfuryl fluoride. Using his strong relationships with manufacturers, he worked with Dow AgroSciences and various user groups to help him.

“To get Congress to save a pesticide in almost unprecedented,” says Bruce Carter, president of Carter Services in Farmington, N.M., and board member of the New Mexico Pest Management Association.

But before legislative triumphs, a young Harrington determined careers in sports and journalism weren’t for him. As a kid, he had visions of being a professional athlete, which faded quickly. After graduating from high school, he attended California University of Pennsylvania, where he played soccer and wrote for the school newspaper. At that point in his life, he wanted to become a sportswriter. But after writing just two baseball articles for the school paper, he decided a job like that would be too redundant.

As the 1988 presidential election heated up, Harrington’s interests evolved; he became more involved in politics and public policy. He had various jobs in public affairs and wrote political columns for the school newspaper. Then he transferred to the University of Maryland — which was closer to his home — where he took entomology classes and worked several internships on Capitol Hill. 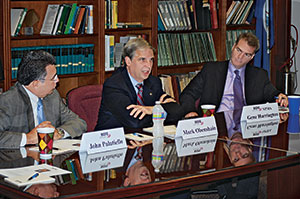 During his last class in college, he interned with then-Sen. Byron Dorgan (D-N.D.). Harrington also interned with then-Sen. Robert Kasten (R-Wis.) and then-U.S. Rep. Tim Penny (DFL-Minn.). After earning a bachelor’s of science degree in journalism with a minor in government and politics, Harrington was hired by Dorgan’s office as a legislative correspondent. He worked for Dorgan from 1992 to 1994. In 1994, he applied for a job at the then-National Pest Control Association, and it hired him as manager of government affairs. He’s been there since.

Spreading the word
Throughout the past 20 years, Harrington says, one of his biggest career challenges has been communicating to state and federal legislators exactly what it is that the pest management industry does.

“People downplay the need for what the industry does, and the significance of retaining PMPs,” he says, acknowledging that, by and large, the NPMA has a good relationship with the U.S. Environmental Protection Agency (EPA) and state regulatory offices.

Another big challenge is educating the legislators that the activist groups get to first.

“We make sure legislators, especially the new ones, are well informed,” he says.

One issue that required a big education component was PMPs losing work to the U.S. Department of Agriculture’s Wildlife Services (USDA-WS).

“We brought the issue to the attention of lawmakers, who were hesitant to believe the story we were telling them,” Harrington says. “When people first heard this, they thought it wasn’t true, but we provided facts and details. It was a problem.” 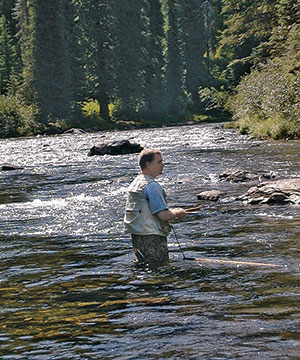 Harrington worked with lawmakers and their staffs on legislation, establishing parameters about the type of work the USDA-WS could and could not perform. The legislation eventually led to the agency adopting a policy precluding USDA-WS from performing urban rodent control in most circumstances. The policy went into effect in October 2013.

Other key federal legislative victories for Harrington include helping make workable a 2009 measure that initially would have made the treatment of pests on airplanes extremely difficult, and getting an earmark for federal termiticide research included in the fiscal year 1999 Omnibus Appropriations Act.

State issues, too
Harrington also has played a significant role in state legislative and regulatory issues, helping develop and implement workable pest management legislation and rulemaking from Alaska to Maine.

New Mexico is just one example: Between 1995 and 2000, the state’s pest management industry was seemingly under constant attack by activist groups that regularly pushed legislation for multiple chemical sensitivity (MCS), anti-preemption and school integrated pest management (IPM). In the spring of 2000, activist groups circumvented the state’s agriculture department (its pesticide regulatory agency), and persuaded the board of education to take up onerous, unworkable school IPM regulations that would have made controlling pests at schools difficult.

Harrington accompanied Carter throughout the state for two weeks while they developed and executed a lobbying strategy, enlisting the help of a member of the board of education. Within 24 hours, they convinced the board member to rewrite the regulation to the industry’s liking. The suggestions were adopted, and are still in place today. And since, the activists have rarely challenged the industry at the state level, according to Carter.

“Without Gene, this victory wouldn’t have happened,” Carter says.

“I’m often approached by people in the industry with concerns about regulation,” Harrington says. “I do everything I can to help.”

In 2007, Arizona was going through a sunset review of its Structural Pest Control Commission to determine whether the commission was worth retaining or should be abolished. Harrington and the NPMA worked with PMPs in Arizona for six years to make sure the industry’s interests were kept in mind when the state dissolved the commission and moved pest control regulation to the Department of Administration and, ultimately, the Department of Agriculture. 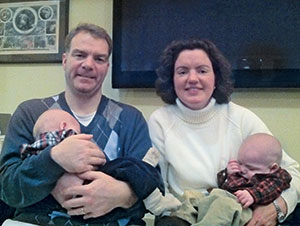 “Initially, we supported retaining the commission, but legislators decided to abolish it,” Harrington explains. “Then we said we need to be put in the Department of Agriculture, not the Department of Environment. My experience in Arizona was akin to a 500-level course about public policy.”

Harrington acknowledges regions of the country are affected by the pest management industry differently. For example, lawmakers in the Southeast are more aware of the industry and its value because pest pressure in that region is much higher than, say, in the Northeast. As a result, lawmakers in the Northeast aren’t as aware of the pest management industry when making policy.

Since Harrington started at NPMA, the association’s relationship with the EPA has improved — but he credits that primarily as a result of the work of CEO and fellow Hall of Famer Bob Rosenberg. Harrington has focused more on congressional, state legislative and administrative, and other federal regulatory issues. Still, he and Rosenberg worked closely on several issues (including collaborating on a long-running legislative column in Pest Management Professional magazine), and Harrington credits Rosenberg for getting the opportunity to work at NPMA.

“I wouldn’t be here if it wasn’t for him,” Harrington says. “He hired me.”

Other mentors include Carter, who educated Harrington about bird, rodent and snake control; Gene Chafe, the general manager of Kennewick, Wash.-based Senske Pest Control, who was instrumental in educating Harrington about industry operations, products and other aspects of field work; and Ken Frederick, a Tucson PMP with whom Harrington on the aforementioned issue in Arizona.

The pesticide issues that Harrington and NPMA’s public policy staff are working on these days include pollinator protection and the ongoing evaluation of pesticide use.

“This and future rounds of EPA’s pesticide evaluations are going to be more rigorous than in the past, which poses challenges for industry,” he says. “We won’t lose many compounds outright, but labels will be much tighter.”

John Walsh is a PMP contributor. You can reach  him at jwalsheditor@gmail.com.