Wood-Destroying Organisms are on the Rise 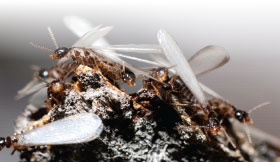 2013 was the year of nonsubterranean-termite wood-destroying organisms (WDO) and what appears to be evasive wood-infesting insect species. Most of the cases appeared in new construction and structures that were remodeled recently. The majority of the problems can be traced to home improvements involving hardwood flooring, cabinets and trim work. After much research, discussion and field-reported cases, I predict this problem is just beginning and will continue to worsen as these houses age. Consider three significant contributing factors:

1. Younger wood used in construction. Wood harvested from the United States and Canada isn’t old virgin timber; it’s new, younger wood that’s loaded with starch or the softwood many beetles and borers prefer in the forest and after a fresh cut. Wood itself has its own built-in protection from most insects and fungus, but when that timber has been compromised by drought, fire or mechanical damage, it becomes susceptible to disease, insects and fungi.

2. Imported wood and hitchhiking pests. With the housing boom during the 1980s, the U.S. and Canadian supply was picked over. Additionally, environmental concerns placed harvesting restrictions on forests, which, in turned, increased prices. This made purchasing wood from other countries more feasible and increased importing building materials from other countries. But some overseas shipments brought invasive species we in the U.S. aren’t used to dealing with and for which there are no native predators. This has forced us to deal with many new species of wood-infesting insects and fungi. Wood leaving the U.S. has to be treated and inspected, but new wood of any type coming into this country doesn’t have to be treated or inspected. Only 2 percent of imported wood and wood products are inspected.

3. The treated wood myth. Much of the public seems to believe the new wood they purchase is pressure treated before it’s used in their new house, but most of the structural timbers aren’t kiln-dried or treated, except new wood sold as blue or yellow wood. Treated wood came under strict regulations because the materials used were no longer allowed. The exceptions in a house are the outside sill plate (mud sill) on crawlspaces and sill plates on slabs on the ground floor, unless it’s going to have termite shields, then it’s not required. Wood in contact with the ground or below ground is recommended to be pressure treated but too often isn’t.

Most inquiries I’ve been receiving are coming from owners of homes less than 10 years old or owners of homes that have been remodeled or updated in the past five years. Problems are stemming from new hardwood floors, trim, door and window cases, substructure timbers and roof trusses. Imported or custom-made furniture and cabinetry also are contributing factors. Almost all new evidence appears in hardwoods, with oak high on the list for woodborers. Furniture also is high on the list, with mostly powderpost beetles.

Pest management professionals (PMPs) need to be careful when pulled into situations involving these insects because potential customers are already confused by conflicting information and are unhappy. PMPs shouldn’t be tempted to sell something that’s not needed because most of the infestations aren’t active at the time of inspection, or worse, the service simply might not work.

Too often, topical treatment, drilling or treatment with liquid or foam won’t control the immediate infestation. If activity is present, fumigation is the best solution if it’s feasible. Replacing the infested or damage wood generally is the best recommendation. If it’s a removable item, heat and/or fumigation is a solution, especially if PMPs are dealing with an active infestation of beetles, borers or drywood termites.

Hardy is a PMP contributor and can be reached at paul@jphardy.com.

Contributor Paul Hardy, a PMP Hall of Famer (Class of 2005), can be reached at paul@jphardy.com.