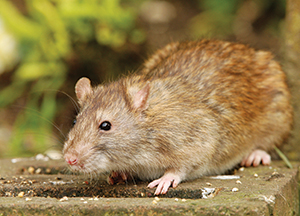 A rat flea’s host with the most. Photo courtesy istock.com/scooperdigital

Fact: Bubonic — as well as septicemic and pneumonic plague — depend on the propagation and spread of Yersinia pestis bacteria. Y. pestis is able to aggregate in the gut of Xenopsylla cheopis (tropical rat flea, also known as the Oriental rat flea) and travel from mammal host to mammal host. The bacteria won’t harm the flea, but does infect the mammal host when the flea bites.

Fiction: Plague is spread from casual contact with infected people or animals.

Fact: Bites from infected fleas cause the disease. The Y. pestis bacteria accumulated in the flea is regurgitated into the bite wound and causes infection.

Fiction: Bubonic plague is the only disease associated with rat fleas.

Fiction: Once the flea hatches, it only has days to live.

Fact: Once the flea hatches, it grows into a larva that spins a cocoon and pupates. The flea can be in the pupal stage from one week to six months. Evidence shows it can remain in cocoon stage for a year, if conditions are not favorable to finding a host. The other good news? Diseases are passed from one generation to the next via the eggs. It’s critical that the management program addresses the eggs and adult stages.