Stored Product Pests: Some Pantry Pests Go Against the Grain 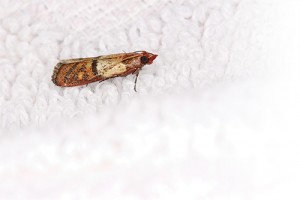 For decades, grain or pantry pests have been pigeonholed into one of four categories, under the assumption it helps pinpoint where they’re breeding. For example:

1. Internal feeders are supposed to breed in whole grain.

2. External feeders are supposed to breed in cracked grain.

3. Scavengers are supposed to breed in milled product.

4. Fungus feeders are supposed to breed in moist grain.

For the most part, this is correct. But there are times when the insects don’t play by the rules. Here are a few examples that have occurred on my watch through the years.

An inspection of a food warehouse revealed rice weevils crawling to the floor/wall juncture along one interior wall. None of the most likely products appeared contaminated, and all were well packaged. There were, however, cracks in the floor.

Taking a thin spatula, I was able to dig compact flour out from the cracks. The flour had become compact from the wheels of forklifts driving over the area almost daily. Rice weevil larvae and pupae were found embedded in the flour in considerable numbers.

Cleaning the crack and sealing the floor eliminated the breeding area. The loose adult weevils were vacuumed from the area where they’d congregated.

Pheromone traps revealed scattered pockets of adult Indianmeal moths (IMM). The normally suspect food was clean. The practice of first in-first out (FIFO) inventory was excellent. Any spills were cleaned within 15 minutes.

But by crawling deep into the racks, I was able to find old rodent bait tucked into different areas. The previous pest company had thrown place packs into inaccessible areas.

What surprised me was the speed in which the IMM found all the rodent bait. It took me days to find them all. Based on the life cycle of the moth, and when the baits were installed, they found the bait faster than I did — or was the bait already infested when installed?

Because they can’t fly, spider beetles travel by walking. Initially, it looked like the beetles were in some of the milled powder left from manufacturing pills. But after further investigation and questions, we learned that about three months previous, the pharmaceutical facility had had a severe mouse infestation. The beetles were feeding on the rodent hair.

I should point out, though, it wasn’t easy to find them all. It took months.

Bean Weevil Hangs out on a Living Room Windowsill

The beans stored in the kitchen cabinet were in plastic, tightly sealed containers. The beans inside weren’t contaminated. More investigation revealed the homeowner purchased a beanbag cushion several months earlier. The beans in the bag were the source. It illustrates why a pest management professional (PMP) must keep asking questions.

Another grain pest, another mystery: I couldn’t find beetles in the pantry or living quarters. Rodent bait was a suspect, but it wasn’t the key to the dilemma. There were no paper wasps in the attic (another warehouse beetle breeding source).

The customer said this was the second year the problem occurred. It started in the spring and continued all summer.

I was able to ascertain that five years earlier, a PMP had eliminated a live honeybee colony in the wall where the bedroom was located. By crawling into the attic, flattening my body out as low as possible and using a long exterior mirror and flashlight, I could see thousands of Trogoderma (warehouse beetles) feeding on the old dead honey bees and nest material.

I knew dumping pesticide dust on the area wouldn’t eliminate the problem. Instead, we opened the wall from the exterior through a fascia board. We vacuumed the dead bees, the hive and the beetles. A small amount of pesticide dust was added, and the affected exterior was replaced. It worked.

Indianmeal moths can be found outside of the pantry