Did You Know? Fire Ants 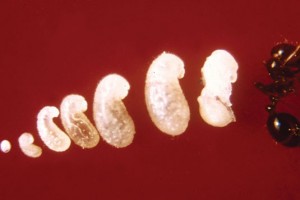 Red imported fire ant (RIFA) populations cost the United States more than $5 billion annually for medical treatment, damage and control of infestations. This doesn’t include the $750 million in damage they do to livestock and crops. Other “fun facts” include:

⦁ RIFA (Solenopsis invicta) attack intruders by swarming, then releasing a pheromone attack signal to bite. But they only bite to grip their victim, and then inject an alkaloid venom through an abdominal stinger. Although the ant can sting multiple times and live, the venom can cause an anaphylactic reaction in young children, the elderly and those who are sensitive to it.

⦁ RIFA colonies can have multiple queens, which can live six to eight years and produce 250,000 workers in a year.

⦁ RIFA mounds in fields or lawns can measure as high as 16 in. above the soil surface.

⦁ Cornmeal or boiling water poured on the mounds will not control fire ants. It just makes them mad, and they will relocate their colony nearby. Rather, a professional using a two-step baiting process with fast baits, slow baits or a combination of the two will provide control.

⦁ A biological solution to RIFA that shows promise in the United States is the use of phorid flies from the genus Pseudacteon, commonly referred to as ant-decapitating flies. The adult females lay eggs in a captured ant’s thorax; the larvae migrate to the head, which then falls off two to four weeks later. After another two weeks, the new adults emerge to repeat the cycle.

You can reach the Kate and Jeff McGovern at jeffreymcgovern@mindspring.com.