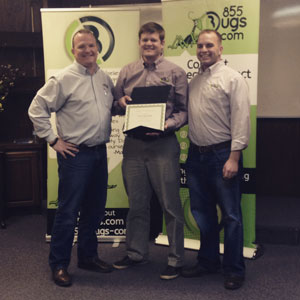 Jason Satterwhite and Dustin Webster have helped Waco, Texas-based 855bugs.com reach its 10th franchise in less than a year. Satterwhite, of Kerrville, Texas, discovered that he wanted to be self-employed after working several years for a national pest control company.

“I pride myself on the ability to communicate with the customer and instill a sense of confidence for the service I provide,” he says.

Webster, of McKinney, Texas, worked for multiple companies in the pest control industry and had the goal to build a long-term equity for a future for himself and for his family.

“I see this franchise as helping me get my feet off the ground in doing something that I have wanted to do for the last two years, which is starting an honest and hard-working pest control company that is customer oriented and trustworthy,” Webster says.

“We are excited to have found and appointed individuals, such as Jason Satterwhite and Dustin Webster, into our organization to serve their local communities,” says Patrick Baldwin, president of 855bugs.com.

What every business needs to grow