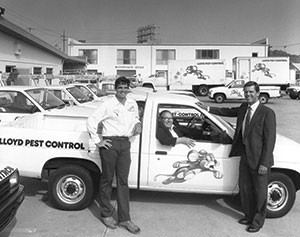 In 1937, Al Ogle traveled from Los Angeles to San Diego and bought The Lloyd Co. for $125. That’s no misprint: Ogle purchased the company for $125 — approximately $2,000 today. At the time, the business had monthly sales of about $47. Most of the work was rodent control.

Ogle later changed the name of the company to Lloyd Pest Control, which has turned out to be one of the most successful pest control companies in the country. Today, Lloyd Pest Control has gross sales of $26 million a year. Including its San Diego corporate office, it employs 260 employees across seven operating branches.

Al Ogle ran Lloyd Pest Control until 1975, when his son, Jim, took over.

“Dad built the business,” Jim Ogle says. “He kept the name Lloyd because San Diego was relatively small at that time, and the people who lived there wanted to do business with people in San Diego.”

During World War II, a vision test determined Al Ogle was colorblind, so he was designated 4-F and exempt from service. By the end of the war, he had about five general pest control routes.

In 1960, Jim Ogle completed a stint in the U.S. Navy and joined his father in the family business. Al Ogle saw a future in termite control, so he had his son specialize in termite work and gain the necessary licensing before he could take the reins of Lloyd Pest Control 15 years later. Jim Ogle says his focus on termites led to a lot of added business. 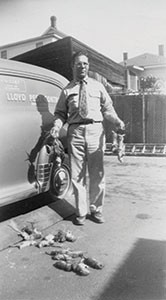 In 2000, Jim Ogle retired from the company and his son Jamie took his place.

“I’ve worked full-time for Lloyd Pest Control since 1991 after graduating from college at the University of California – Davis,” Jamie Ogle says, adding he also worked at Lloyd in the summers while attending high school and college.

Like fathers, like sons
When Al Ogle retired, he and Jim did an annuity for the latter’s purchase of the business. When Jim retired, Jamie went on an installment plan to purchase Lloyd Pest Control. Jamie says working from the bottom up helped him better prepare for his leadership role: “Any job I had with the company, I spent time doing it, not just watching someone else. I did it on my own in a uniform, from janitor to mechanic’s assistant to pest control technician.”

One of the first modifications made under Jamie Ogle’s leadership was the organization of a call center.

“In 2002, we switched from a branch system, where all the calls were answered at the various branches, to a call center,” he says. “Now, all customer calls ring right outside my door. We can feel the pulse of how the company is doing by listening to the calls.”

Under Jamie’s leadership, Lloyd has opened three branches and closed one. All of the company’s recent growth has taken place in Southern California.

“We do an action plan every year, and part of the plan is to be a leading provider of pest management services throughout southern California,” Jamie Ogle says. “There are enough customers and bugs here that we don’t need to be in other states. I don’t want to get on an airplane to go visit a branch office. If I want to be home for dinner, I can be. That’s part of a family business.”

Jamie Ogle says he’s trying to follow his grandfather’s and father’s recipe for success, which includes not being overly aggressive or foolhardy about growth.

“When we open an office, we work to ensure success for that office before we look at moving into another area,” he says. “We aren’t going to get too far extended and put our business at risk.”

Will there be a fourth generation Ogle at the helm of Lloyd Pest Control one day? One of Jamie’s children wants to be a meteorologist; the other is looking at becoming a storm chaser. But as Jamie Ogle has learned, there’s no telling what the future will bring.