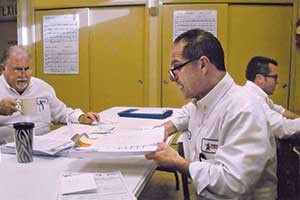 It’s 8:30 a.m. on a Wednesday in early March. We’re in the all-purpose room at Fahey Pest Management in Sarasota, Fla., and the company’s three salesmen are preparing for another busy day.

Ray Linfante, Giacomo Minafra and John Pollock are busy wrapping up their work orders from the previous day. The trio is also completing a series of other sales tasks, such as writing thank-you notes to customers they sold work to the day before.

There’s a lot of banter that accompanies preparing for another sales day. For example, Linfante says he sold two flea jobs last week, so it must be flea season now. (That’s a safe bet, seeing as how the winter weather appears to have left Florida and was replaced by temperatures in the 80s.)

“We also do quite a bit with rodents,” Linfante says. “But that’s pretty much all year around.”

General pest work accounts for the most revenue, but rodents account for about 20 percent of Fahey’s revenue.

Pollock mentions that one of his recent calls was at a home that had a trophy room containing taxidermied animals. Rodents were entering the room from an outside vent. Obviously, rodent exclusion was needed.

Minafra says he had an excellent day the previous day, selling more than $8,000. “That was an extremely good day,” he says.

The conversation turns to how Fahey is about to launch a series of local TV commercials. The sales team will be watching customers’ reactions to the commercials, and gauging whether there’s a change in the number of calls to the office.

The road beckons
I’m scheduled to ride with Minafra, who has three wood-destroying organism (WDO) reports to finish. He also needs to pick up paperwork for a large termite baiting system account. After more conversation in the office, we leave.

The first stop is at a large, beautiful home on a canal where Minafra needs to complete the WDO report. After going through the home, tapping on the baseboards and other areas, Minafra gives a verbal report to the new owner. 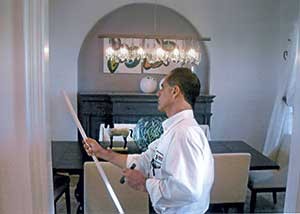 Giacomo Minafra taps on the wall of a residential account, looking for signs of a termite swarm, with a PVC pipe. Photo: Jerry Mix

He explains to her that he was looking for termite droppings and swarmers, but found neither. Minafra explains how he used PVC pipe to conduct his inspections instead of the butt end of a screwdriver that some inspectors use, because he doesn’t have to bend over.

Minafra points out the need for replacing the screens around the crawlspace to prevent any future rodent problems. He gives the new owner an information kit about Fahey Pest Management, along with his business card. He also makes a pitch for future business if she has any additional pest problems, and says he’ll follow up with her in a month or two.

The homeowner thanks Minafra for his work on the WDO inspection, and admits she has had problems with previous WDO inspectors. But she seems pleased with this visit.

Networking leads to sales
The second stop of the day is another WDO inspection, this time at a small condo in Sarasota.

“A WDO inspection is a positive step for what may come later,” Minafra says. “It’s all about getting a foot in the door.”

Sure enough, the sales listing agent who lets us into the condo remembers Minafra from a previous WDO report job. He requests that Minafra schedule a general pest control job at his own home before he puts it up for sale in the not-too-distant future.

Like the first stop, Minafra finds no signs of termites in the condo, and the agent is relieved. 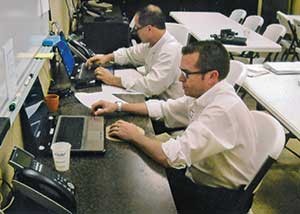 The third stop of the day is to pick up paperwork for a new baiting job. The work will consist of 11 buildings and a pool house. Minafra makes sure he thanks the customer for the business.

On our return to the office, where I’ll take my leave and Minafra will grab a quick lunch before heading out for his afternoon appointments, he explains that Fahey receives many of its sales leads on phone calls to the office, but the volume of completed forms from the website is also increasing. A third significant source of business is customer referrals — word-of-mouth as well as favorable reviews and ratings posted online at AngiesList.com.

“Our reviews in Angie’s List are very high,” he adds. “Plus our truck signage is also good for sales leads. They’re traveling billboards for our business.”

As he pulls into the company parking lot, Minafra tells me how much he really loves his work.

“Fahey did a great job training me,” he says. “It’s a company that cares, and that makes you want to do better.”

On the rise
General Manager Kyle Varona says Fahey Pest Management generated sales of $2.7 million in 2014 and is expecting to generate $2.9 million this year. Fahey currently is growing at a rate of 7 percent to 12 percent annually.

Mix served as editor and publisher of PMP for more than 20 years and is a member of the PMP Hall of Fame (Class of 2005). You can reach him at jnmix@aol.com.