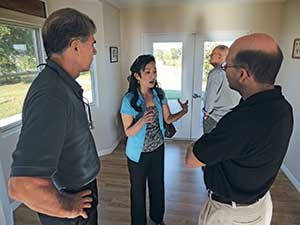 After all, she’s the University of Florida’s (UF’s) director of Pest Management University (PMU), and director of the state’s integrated pest management (IPM) program for schools.

Born and raised in Hawaii, Oi has been in and out of Florida since 1990. She received her bachelor’s and master’s degrees from the University of Hawaii in zoology and entomology, respectively, and decided to earn her doctorate at UF, studying with Dr. Nan-Yao Su, a noted researcher who had a role in developing termite baits. She graduated from UF in 1994.

“What I love about this industry is they really don’t care how many letters are after your name, as long as you can help them and you’re honest,” she says.

After graduation, Oi took a position at Auburn University. She and her husband, David, remained at Auburn for three years before returning to Florida in 1998.

In Gainesville, Dr. David Oi is a research entomologist with the U.S. Department of Agriculture (USDA), conducting research about biocontrol for fire ants and other ant species. The couple have a 14-year-old son, Collin.

Hands-on training
Faith Oi is a believer in hands-on training and has had a role in developing and sustaining PMU. Since its first class was launched in 2007 as a cooperative effort among UF, the Florida pest management industry and the Florida Department of Agriculture and Consumer Services (DACS) — the regulators of the pest control industry in Florida — PMU has trained more than 1,000 PMPs.

“Our mission is to provide the best science-based information and training we can,” she says. “This year, we’ll end up training more than 300 pest management folks.”

The classes take place at the Mid-Florida Research and Education Center. They range from a course about pest management basics to classes about general household pests, wood-destroying organisms or lawn and ornamental training.

Oi says the program also has an agreement with the state of Florida to offer the state exam after master’s level classes. “It’s been a successful add-on,” she says. “It’s our goal to maintain a well trained work force.”

The number of people in each class is capped at 20, and pest management experts from around the state teach the classes.

“We never teach company policies, but we do teach the label,” she says.

In addition to PMPs attending the program, school personnel who are involved with IPM programs also come to Apopka for training.

“It’s a nice feeling to have people come to our classes because they’re excited about the information they’re getting,” Oi says. “It’s everything to see their light go on.”

Industry-built facility
The PMU facility was built in large part by pest management industry-raised funds in 2000 and beyond. There were no government funds available for this project at the time.

“The Florida pest management industry decided that this was going to be important for them, so they started fund-raising and fronted a good bit of the money as well,” Oi says.

In addition to working at PMU, Oi keeps busy advising PMPs about various pest management problems.
“This job is never boring because I never have pest problems that are exactly the same,” she says. “The principles we use at work go across the breadth of issues we deal with, but the specific problems are always a little different.

“A lot of times when PMPs call me, their pest problem can’t be solved with the usual answers,” she adds.
Oi and her colleagues field phone calls and maintain their social media presence. Sometimes they also provide information about PMU in addition to solving the typical pest problems.

To Oi, continued training is intrinsic to professional development, no matter the career stage.

“I need advice too, so I always listen to what the people in the field say because they see a lot more than I do,” Oi adds. “I love what I do; this industry has been very good to me.”

Mix served as editor and publisher of PMP for more than 20 years and is a member of the PMP Hall of Fame (Class of 2005). You can reach him at jnmix@aol.com.