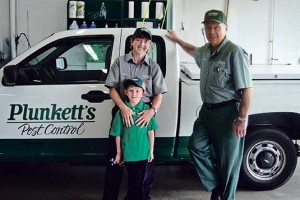 A century of service is an industry milestone, and the O’Reilly family has been running Plunkett’s for 92 of those 100 years. Bill O’Reilly was in charge for the first 45 years, followed by John O’Reilly for 35 years. Stacy O’Reilly has been the Plunkett’s boss for the past 12 years.

Tom Plunkett launched the company in 1915, but died suddenly in 1923. Plunkett’s widow then sold the company to its sole technician: Bill O’Reilly. While time has erased exactly how much money exchanged hands, Stacy O’Reilly reports her grandfather occasionally joked it was the worst $5,000 he ever spent.

In 1968, it became apparent to Bill that it was time for John, the oldest of his three children, to take over the company. It was less apparent to John, who had earned a degree from the University of Minnesota and was ready to join the U.S. Navy. The elder O’Reilly had other ideas, and John became president. He ran the company with his wife, Sandra.

In 2003, the succession process started anew — this time, with John’s daughter Stacy.

“I acquired the company through a combination of gifting to me and payments over time,” she says. “But I probably won’t be able to make the last payment before I retire.

“My parents have been so gracious about it,” she continues. “I couldn’t be more appreciative and luckier about the entire transaction. I owe my parents 100 times over.”

John and Sandra might have left pests behind, but not their business acumen: They own Woodland Trails Bed & Breakfast, a cozy inn in Hinckley, Minn.

Central location
Plunkett’s does some things a little differently than its regional-sized counterparts. The company operates out of its suburban Minneapolis headquarters. There are no branch offices. A local warehouse sends products when the technicians need them.

Every technician comes into the main office at least once a year for a two-day training meeting. Plunkett’s also has service supervisors and area managers who handle business in the company’s 10-state service area.

“We don’t let the technicians go too long without someone checking in with them,” Stacy says.

Stacy grew up in the industry, but also gained outside experience. She has a business degree from the University of St. Thomas in Minneapolis, and a master’s degree in business administration from Dartmouth College, Hanover, N.H. She spent time as a business consultant after college, but her long-term goal was to run Plunkett’s.

After working as a Plunkett’s technician for a year, Stacy was promoted to supervisor for a year before taking the reins. The company business is split 80 percent commercial and 20 percent residential.

“I’ll take any good clients,” she says. “We enjoy both client segments. We advertise for residential customers, and we have a sales team that targets commercial clients.”

A fourth-generation O’Reilly at the helm is uncertain at this point: Stacy’s 8-year-old son, William, hasn’t decided. At press time, he was “pretty sure” he was going to be either a scientist or an astronaut.

Cold is relative
What’s it like in Minnesota in the winter? Stacy O’Reilly illustrates it pretty vividly:

“My son and I were outside one night, playing hockey. It was snowing, and it was actually rock-star cool. Will asked me what the temperature was, and I said it’s nine. And he wondered whether it was nine degrees above or nine degrees below zero. I said above, and he said, ‘Sweet! It’s warm.’ I laughed, because only a Minnesotan could come up with a line like that.”