Ghost moose, ticks, and pest management in a new age 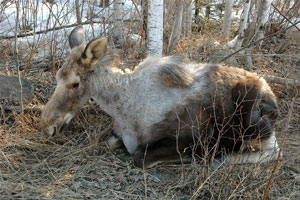 This heartbreaking image of a ghost moose calf is part of an article on the University of Minnesota website: http://www.nrri.umn.edu/moose/information/WinterTick.html

Global warming, or “climate change” as many call it, appears to be having a significant impact on tick populations, and posing a direct threat to other wildlife. As an example, check out the harsh realities National Geographic recently encountered in New England, where incidents of “ghost moose” are on the rise.

Because of the warming climate, ticks are beginning to survive and reproduce at a rate that is contributing to the decline of New England’s moose population. In New Hampshire alone, the moose population has dropped from 7,500 in the 1990s to 4,500 in 2013, and it is possible that this phenomenon is partly responsible. In one documented instance, a dead moose was found with more than 100,000 engorged ticks on it. These scraggly, emaciated “ghost moose” are named for the light patches of skin showing as a result of their attempts to remove tens of thousands of ticks attached to their skin by rubbing off their fur. They have become a sad, common sight in New England, and they are also bringing tick populations ever-closer to humans as they forage in residential back yards.

As climate change has begun to affect the US, it has shifted weather patterns to ever-greater extremes — in many cases, causing people to question how we could be having such cold, snow-bound winters if we are indeed suffering from global warming. And even if the climate is changing, many are convinced that this is just part the natural process. But weather extremes are, as scientists originally predicted, caused by a warming climate that humans are clearly creating.

This fact is not lost on the Norwood, Mass.-based professional pest management firm that I represent, Environmental Health Services (EHS). Thirty years ago, John Stellberger founded EHS with a focus on sustainability. From implementing single-stream recycling to planting wildflowers at our offices to help pollinator populations, EHS literally grows greener by the day.

It is our hope that our pest management colleagues take note of the environment changing around us all, and continue to put an emphasis on integrated pest management (IPM) techniques in their control strategies to keep chemical use to a minimum. We also hope they join us in educating customers about the very real health threats ticks pose to wildlife (and by extension, pets and humans), and why professional pest management services are vital.