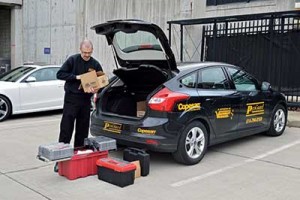 Adam Warrix loads his pull-along toolbox to service the account. He says the box has been a lifesaver for his bad back. Photo: Heather Gooch

When Pest Management Professional Magazine received an invitation to the retirement party of Dr. Gerry “Doc” Wegner, BCE, technical director and staff entomologist of Varment Guard Environmental Services and its commercial division, ProGuard Commercial Pest Solutions, in Columbus, Ohio, I was thrilled to go and represent our staff. Doc had been one of the first (of many, I might add) pest management professionals (PMPs) to help acclimate me to the industry in the mid-1990s. He’s been a trusted friend and colleague, and while I’ll miss seeing him at Ohio Pest Management Association gatherings, the Buckeye State’s loss is the Sunshine State’s gain. I also know his successor, Mark Goodman, who has been training alongside Doc for more than a year to make a smooth transition, will continue Doc’s legacy of providing quality training and identification for the technical and office staffs.

It just so happened I was able to make my two-hour drive down I-71 pull double duty: ProGuard Safety Director Adam Warrix and Quality Assurance Jeff East were ready to take me along on part of their respective Friday morning routes.

I first get in the car with Adam, who let me in on an unusual situation that was unfolding at one of the company’s largest accounts. It seems that ProGuard has had this commercial account for nearly a decade, basically as long as the facility has been around. It’s in a downtown urban setting, so a rodent control and prevention plan was expected. But the ProGuard team didn’t plan on having house and deer mouse multiple-catch trap counts go from what’s considered normal for the interior of a facility of this size and activity, to suddenly zero. Zilch. Nada. There was no unusual change in the supplier chain, weather, construction or other outside pressure, and outdoor catches were still normal — low, but no drop in numbers. Common sense told the ProGuard team that while they’re good, no one is that good.

“This was happening for a few weeks, with a variety of traps that we have had continued success with at our other accounts,” Adam says. “Just to monitor things, we changed it up by replacing some traps with glue boards and bait stations, and got nothing. But then we placed snap traps, and we started seeing activity — just in the snaps, not on boards or in the remaining stations — once again.”

His words rang true as I shadowed Adam while he made his rounds at the facility. Trap after trap was empty; bait stations were untouched. Glue boards were empty. And of all the snap traps, we only found one that caught something — a baby mouse. Another juvenile is caught in a monitor baited for cockroaches.

“That’s the other strange thing. We’re only catching juveniles when we do catch one in the trap,” Adam tells me. “It’s as if the adults know better and are passing the info along to their young.”

“Maybe it’s a new, miniature mouse species?” I suggest, tongue in cheek. Adam raises an eyebrow wryly, and says that honestly, no theory was too far out there to consider.

Adam is working with a variety of ProGuard’s rodent control vendors to see whether they have any insights. Again, he emphasizes he doesn’t think it’s equipment failure, because they are seeing great results at every other account. He is just facing the possibility that this mouse population has gone beyond trap shyness into full-on avoidance, and it’s possibly a trait that is being bred deeper into each subsequent generation.

Locating an actual rodent nest has proved elusive so far. The crew is beginning to think this population leads a nomadic existence, moving from opportunity to opportunity.

“They have what they need, deep within these walls, and what they don’t have, they can get fairly easily,” Adam explains, indicating the various food and drink kiosks scattered throughout the facility.

In fact, the kiosks are our only true source of pest activity on our visit: Drain flies gather around several drains, and feast on the gunk in the holster for soda guns next to the fountain drinks. It’s supposed to be cleaned regularly by the kiosk staffers, Adam says, but because they rotate kiosks so frequently, there’s no sense of ownership — and after an event, there’s no real incentive for a minimum-wage worker to clean a kiosk to the level it needs to be to avoid the problem.

“We have offered several times to add this service to our contract, but they always turn us down, saying their in-house employees can do it,” he says. We take a few photos, and even video of the plentiful flies congregating around the drain: “Maybe the visual proof will change their minds.”

Back to headquarters
We return to the ProGuard office, where Jeff is waiting for me. Jeff’s role at the food plant we’re seeing today is to inspect before an official food safety audit. The customer wants to make sure it will get a clean bill of health before the inspector — who can make or break its reputation — comes in unannounced.

“My job is to go in and find ‘What have you done to prevent pests?’” explains Jeff, who has been withVarmentGuard/ProGuard for 30 years. “We have 104 snap traps placed around the building, for example.”

Just as I did with Adam, Jeff and I sign in and receive visitor passes. Jeff’s not doing the full-on inspection of the processing side today — that would require a full hazmat suit and booties. He’s basically ensuring the plant has all its paperwork in order (it does) and its under-construction addition hasn’t increased the pest pressure (it hasn’t). In fact, the plant is so clean, the only pest issue we find in this late-March visit is a small group of lady beetles inside a fluorescent ceiling light fixture in a hallway.

“I told them about that last time,” Jeff sighs, noting that its distance from the production side of the facility means it’s too minor to worry about for inspection purposes.

He introduces me to the plant’s quality manager, who is happy to see Jeff and confirms all is well with pest management.

We go back to an office where the pest log is kept. Jeff opens the binder and looks it over, along with paperwork certifying that a ProGuard technician is here regularly, and the integrated pest management (IPM) document showing what products are and are not allowed to be used in the event of an infestation.

“Everything is in order,” he says, punching the update into a program on his tablet. “Sometimes I make a printout here and leave it for them, but since my contact isn’t here today, I can just email it to him when we get back to the office.”

We finish our tour by inspecting the addition’s exterior. Rodent bait stations are stacked in a corner, waiting to be distributed as soon as possible.

“The landscaping’s been delayed, which has delayed us,” Jeff says. “Once the trees and bushes are in, we can place our stations.”

Jeff takes me back to the office, where preparations to get to Doc’s retirement party are underway. Both Adam and Mark have co-opted Doc’s newly rediscovered company shirts from the 1980s. They have some fun at the thought of wearing a tie every day.

“But that’s what we used to do,” Doc protests.

Later, I get back in my car and follow Adam and Mark on a short drive to Everyday People Ministries, where the festivities are just getting underway (we’ve posted photos on Facebook from the party). It’s a lovely way to wrap up my visit, celebrating with Doc and his family and friends. But the mouse mystery goes on, unsolved.

You can reach PMP Managing Editor Heather Gooch at hgooch@northcoastmedia.net or 330-321-9754.

We catch a juvenile mouse… in a sticky trap baited for cockroaches. Photo: Heather Gooch

Mopping debris into the drain is an obvious source of the fly problem. Photo: Heather Gooch

Are you using Snapchat?

A Study Buddy in Your Pocket