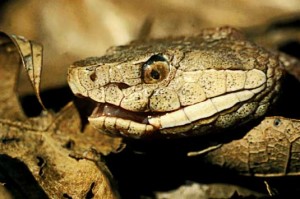 Notice the “pit” of this copperhead, halfway between the nose and the eye. Photo: U.S. Fish and Wildlife Service

Snakes. Just the sight of one makes some people recoil in horror (or chase it with a shovel). Chances are your customers rationalize this behavior by saying, “It might be poisonous, and I don’t want to be bitten.”

In light of these concerns, pest management professionals (PMPs) need to be informed about venomous snakes to help dispel myths, protect themselves and protect their clients.

About 150 species of snakes are native to the United States; 33 are considered venomous. Venomous snakes fall into two major groups:

⦁ The larger group, pit vipers, includes more than 90 percent of the venomous snakes. Pit vipers get their name from the hole (pit) between the eye and nostril. The hole helps them sense heat emanating from prey, so the prey can be found in the dark. Pit vipers also have elliptical eyes and a pair of well-formed fangs. Pit vipers include rattlesnakes, copperheads and cottonmouths.

⦁ In the United States, there are only four species of the second group, coral snakes. Unlike pit vipers, they have round eyes, teeth (not fangs) and distinct red, yellow and black bands. The mnemonic used to identify the venomous coral snakes from similarly looking nonvenomous ones is “Red on yellow, kill a fellow; red on black, venom lack.” 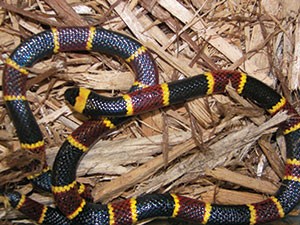 In the U.S., there are only four species of coral snakes.

We’ll focus on pit vipers because coral snakes account for less than 1 percent of venomous bites in the United States. Bites by coral snakes are rare because they’re reclusive, have a small mouth and must gnaw to transmit the venom.

Between 1960 and 1990, no more than 13 people died from a snake bite in any given year. The lethality of a bite depends on several factors, including:

⦁ size of the victim,
⦁ site of the bite (bites to the face are more serious than a bite to an arm or leg),
⦁ amount of venom injected,
⦁ toxicity of the venom, and
⦁ speed and quality of medical treatment. 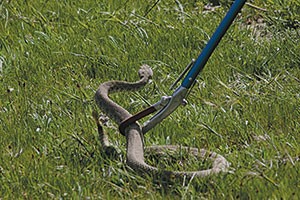 Snake tongs are an essential piece of equipment in the field. Photo: Dr. Stephen Vantassel

For example, bites from copperhead snakes occur in the southeastern United States — but rarely require antivenin because their venom is weak.

You shouldn’t be cavalier about venomous snakes, but consider context when attempting to gauge risk. Your client is far more likely to be bitten by a neighborhood dog than a venomous snake.

Control strategies
1. Identify the snake that led to the call. This step is difficult because clients frequently are poor witnesses. But identification is essential, not only to help guide possible control methods, but also to avoid violating wildlife laws. Many venomous species are protected by state and federal laws because of the snakes’ declining numbers. If there’s a chance the snake is protected, you cannot employ lethal control methods. Contact your state biologist to learn about acceptable control techniques to avoid violating the law and risk being fined.

2. Help manage fears and expectations. Acknowledge your clients’ concerns without reinforcing phobias. Educate the customer about native snakes, particularly the biology of the snake if you can identify it. Avoid overwhelming them with information, however. Instruct phobic clients to walk away from snakes — and assure them snakes are not out to get them or their loved ones. Make sure young children are taught not to approach or handle any snakes. For nonphobic clients, teach them how to distinguish venomous from nonvenomous snakes native to the area. 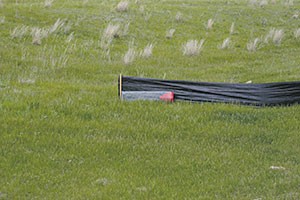 A funnel trap accompanied by a drift fence can be an effective way to trap snakes. Note, however that this trapping method is not legal everywhere. Photo: Dr. Stephen Vantassel

3. Teach clients how to avoid snakes. Tell them to visually inspect dark places before reaching in with their hands. They should avoid tall grass and areas littered with debris where snakes can hide. As a rule, areas favorable to mice will also be favorable to venomous snakes.

4. Modify the habitat. Like all wildlife, snakes need a habitat to survive. Modify the habitat, and there will be fewer snakes. The easiest change is keeping the land mowed and clear of any clutter that provides snakes with cover. Remove or trim anything that blocks your client’s view of the ground.

5. Consider the possibility of there being a hibernaculum (place where snakes hibernate) on or near the property.
If clients complain about multiple snake sightings in spring or fall, there might be a hibernaculum present. If the species is not protected, the hibernaculum can be removed. Otherwise, a drift fence can be installed to prevent snakes from traveling toward unwanted areas of the property. (Be sure drift fences are legal in your area.)

6. If control is deemed necessary and legal, make sure you have the necessary equipment. Place appropriate glue-style traps along edges and travelways likely to be used by snakes. Check them from a distance, because the venomous snake might not be completely stuck to the glue. If the snake can be spotted, use snake tongs to capture the snake. 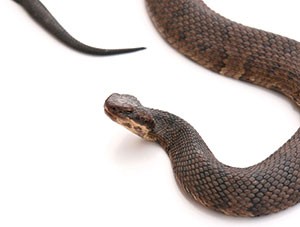 As a rule, snakes can strike out to half their length. If their backs are against a wall or tuft of grass, they can strike out to their full length. Because most snakes are less than 4 ft. long, a 4-ft. set of tongs, coupled with the length of your arm, should provide a safe distance. Place the snake into a secure, bite-proof container — a plastic pail with a locking lid, for example. You don’t want someone to open it accidentally.

You can euthanize snakes with carbon dioxide (CO2), but understand it can take hours. Freezing is another option, but it is not considered euthanasia. Remember, even if you cut off the head of a venomous snake, it is still venomous! Dispose of the head in a way that prevents accidental punctures.

You won’t get rich controlling venomous snakes; but by helping to correct misinformation about them, you can help your clients and ensure the viability of an important and threatened animal group.

Although these animals are commonly called poisonous snakes, the correct term is venomous snakes. The distinction centers on how the toxin is delivered. Poison typically is consumed by the victim. By contrast, venom is injected. In simple terms, pit viper venom generally is considered to be hemotoxic (affecting blood), while coral snake venom is neurotoxic (affecting the nerves). In both cases, venom helps the snake capture its prey by reducing the prey’s ability to struggle.

Many people claim cottonmouths (Agkistrodon piscivorus), also known as water moccasins, are aggressive snakes. They tell stories about snakes attacking their boat or coming after them when standing in the water.

Prof. Dennis Ferraro, a herpetologist at the University of Nebraska-Lincoln, says the majority of these claims are wrong. He argues these snakes use scent to obtain fish, their main food. When the fish approach boats or fishermen, what is perceived as an attack is actually the snake smelling the dead fish (the bait or catches of the day). Thus, the cottonmouth isn’t attacking at all. He just wants a free meal.