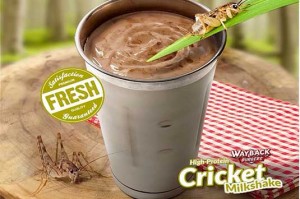 If there are two things you are guaranteed to see everywhere this summer, it is ice cream and insects — just not together. At least, not until now. Starting July 1, fast food chain Wayback Burgers is debuting its Oreo mud pie cricket protein milkshake. The company originally created the bug-infused shake as an April Fools’ Day joke, reports CNBC. But after positive feedback from customers, the burger chain decided to test the milkshake idea in Long Island, N.Y. “We had it for two hours. There were people lined up to try it,” said John Eucalitto, president at Wayback Burgers, in an interview with CNBC. The apparent popularity led to Wayback Burgers unleashing the buggy flavor at more than 100 locations in the United States and Argentina. Check if you have a Wayback Burgers near you here.

Can’t stomach the idea of slurping a milkshake filled with crunchy legs and stringy antennae? No worries. “We use a protein powder that looks very similar to whey powder. So it’s ground up cricket and you wouldn’t even know the difference if you were drinking it, quite honestly,” Gillian Maffeo, director of marketing for Wayback Burgers, told ABC News.

The Peruvian chocolate-flavored cricket powder, which adds 13 grams of protein in a junior size and 18 grams in a regular size, can also be added to other shakes as well. Although the Oreo mud pie cricket protein shake is here for a limited time, July through September, the company says it might keep it around if customers continue to crave crickets.

If you’re feeling brave, or just need a little extra protein in your diet, check out the cricket milkshake for yourself. Or you can always catch a few critters outside and make your own concoction.