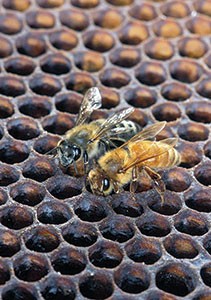 African honey bees (Apis mellifera scutella) were first brought to Brazil in the 1950s to increase honey production. In 1957, 26 swarms escaped and headed north, mating with established colonies of European bees (A. m. ligustica and A. m. iberiensis). The resulting hybrid is A. m. scutellata Lepeletier, often referred to as killer bees. They are more commonly known as Africanized honey bees (AHB) and were first found in the United States in California in 1985.

The only way to tell AHB from other bees is through a DNA test.The honey taste reflects the environment of the bees: European bees prefer floral nectars, whereas AHB have no particular preference. They are frequently found around outdoor bathroom facilities, Dumpsters and old tires.

It is their defensive behavior that has earned AHB their pest status. They have more guards and deploy greater numbers over a larger distance than the common honey bee. AHB deploy hundreds of stingers at the slightest sign of disruption, putting people (especially children and the elderly) at risk.

AHB have largely remained in the southern and coastal regions of the United States. Some have moved north, but they abscond if foraging becomes too challenging.