When Pest Management and Archeology Collide 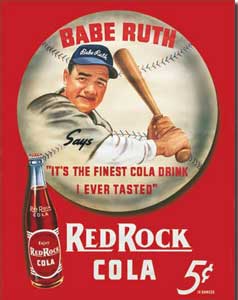 If it was good enough for the Sultan of Swat, it had to be good…

As many of you know, my late father-in-law, Ray Gooch, was a Terminix technician for many years in Canton, Ohio. I never had the pleasure of meeting him, but his legacy lives on among my family.

One favorite tale is how in the late 1970s, he was under a house doing an inspection when he came across a Civil War-era rifle. When he brought it to the attention of the homeowner, she said she didn’t want it and that he could have it.

That story came to mind this week when I read a Brewton (Ala.) Standard article about Eric Morris, a technician for Lewis Pest Control, who found a rare “Red Rock Cola” bottle under a house during a routine visit. The bottle is from the 1940s and was made locally.

“Interestingly, it is the only product personally endorsed by the legendary American league baseball player Babe Ruth,” the article points out.

This morning, I also came across a tweet from Victor Pest, noting that they found a vintage Victor Rat Trap in Lancaster, PA — “just a few miles from our headquarters in Lititz!”

It got me thinking this “#ThrowbackThursday” that there must be other interesting stories out there about what treasures have been found on the job. Sound off below, or give me a shout at hgooch@northcoastmedia.net. Let’s do a show-and-share!