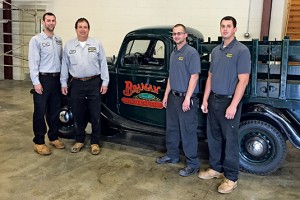 In the 1980s, Jerry Lazarus, owner of Braman Termite and Pest Elimination in Agawam, Mass., was busy doing his very best impression of Pest Management Professional (PMP) Hall of Famer Alvin “Bugs” Burger. You remember Al, the man who made a national reputation for himself and his company by guaranteeing he would eliminate cockroaches from commercial accounts or he would refuse payment.

The parent company for Big Boy restaurants phoned Braman because it was not satisfied with its current pest management provider. The company invited Lazarus to handle the problem.

“I would get up at midnight, go to one of their restaurants and clean it out,” Lazarus says. “I would spend all night — sometimes two or three nights — and then I would go to the next restaurant.

“I was working like Al Burger,” Lazarus adds. “I would go in with a money-back guarantee: If I didn’t get rid of your problem, don’t pay me. Finally, it became clear I knew what I was doing.”

Lazarus says the guarantee is why his company is called Braman Termite and Pest Elimination.

“To this day, we take pride in the same thing,” he says. “We guarantee elimination, or the customer doesn’t pay us. That is what sets us apart from other companies.”

It’s a formula that works. The company is celebrating its 125th year and reports annual revenue just shy of $15 million.

Three generations
Although a Mr. Braman, whose first name has been lost to history, founded the company in 1890, the Lazarus family has been involved almost from the start. In his first year of business, Braman struck a deal with Jack Lazarus (Jerry’s grandfather) to sell pest control chemicals in the latter’s meat market. The arrangement worked well for almost two decades, until Braman decided to retire in 1919.

Braman asked Jack Lazarus whether he was interested in taking over his business if he showed Lazarus how to make the chemicals. Lazarus said yes — and found that the pest control side of things (including branching into residential and commercial service) was more profitable than continuing with the meat market. He devoted himself to Braman Pest until the mid-1950s, when he was diagnosed with amyotrophic lateral sclerosis (ALS), also known as Lou Gehrig’s disease. At that point, his son Edwin (Jerry’s father) took the company’s reins. To do so, Ed needed to come home from Japan, where he’d been working as a civilian entomologist supervising pest control operations in areas under the control of Far East Command occupation forces since the end of World War II.

Ed Lazarus was at the helm of Braman until 1989, when he retired and put Jerry in charge. Jerry’s brother Ben joined the company later, after beginning his career as the head sanitarian at Table Talk Pies. Ben, an entomologist, has been instrumental in technician training and quality assurance in the eastern Massachusetts market.

“It’s been a lot of sweat equity and hard work,” Jerry says. “Nothing was easy.  I worked a lot of nights.”

Jerry believes the three ingredients for success are pride, honesty and service quality.

“The fourth ingredient will then be profit,” he says. “The profit will come, but you have to invest in your company.”

At 55 years old, Jerry jokes that he has a few more years in front of him before he retires. His three sons — Justin, Jacob and Josh — have each shown an interest in continuing in the business.

“I’ll be here with the boys,” he says. If that’s true, it’s likely he’ll share his business philosophies with the next generation: “Work hard and do it right, and learn from your mistakes so you don’t repeat them.”

Jerry Mix served as editor and publisher of PMP for more than 20 years, and is a member of the PMP Hall of Fame (Class of 2005). You can reach him at jnmix@aol.com.