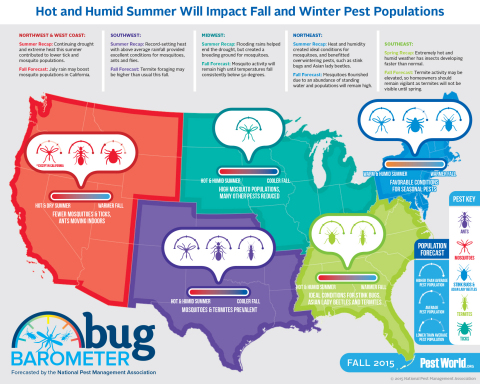 The National Pest Management Association (NPMA) has released its Bug Barometer, a forecast indicating what Americans can expect from pest populations this fall and winter. From the extreme heat and humidity in the Southeast to record rainfall in the Midwest, and an ongoing drought in the Pacific Northwest and on the West Coast – NPMA’s Bug Barometer takes into account the weather patterns of the summer season in every region of the country.

Spring and summer are typically the most active seasons for the majority of pests, such as ticks, mosquitoes and ants, and this year was no exception. Unfortunately, the start of fall doesn’t necessarily mean an end to pest activity, with many of these pests remaining active until temperatures consistently stay below the 50-degree mark and they begin to seek overwintering sites.

“Our entomologists analyzed spring and summer weather reports and patterns from across the country to determine the pest pressure index each region will experience as we head into the fall season,” says Cindy Mannes, vice president of public affairs for the NPMA. “Weather plays a critical role in the ability of pests, such as ticks and mosquitoes, to thrive all year long. Knowing what to expect from the pest population is critical, especially during this time of year when many of us are spending more time outdoors soaking up the last of the summer sun – and potentially exposing ourselves to health concerns such as stings, bites and even pest-borne diseases.”

The NPMA shares its fall Bug Barometer forecast for each region of the United States: