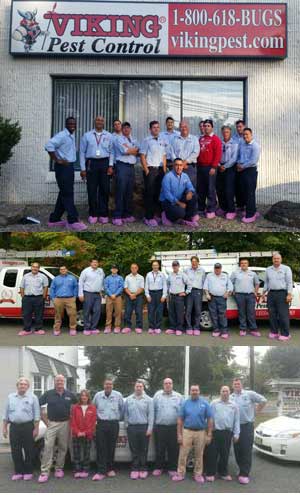 Viking Pest Services, a Copesan Partner headquartered in Warren, N.J., has partnered with Forshaw Distribution to support National Breast Cancer Awareness Month. Forshaw donates $1 to the Breast Cancer Research Foundation for every box of ShuBee shoe covers and gloves purchased in the month of October.

Throughout the year, Viking branch personnel wear blue ShuBee booties during their service to residential clients as well as when servicing sensitive accounts that require protective footwear. CEO and Owner Ed Bradbury, a 2014 PMP Hall of Fame inductee, started this years ago to show Viking customers that “We Care.” For the month of October, Viking Pest Control technicians switch from blue to pink ShuBees to heighten breast cancer awareness.

President Ryan Bradbury took the opportunity to partner with Forshaw Distribution in 2014 when they announced their Pink ShuBee campaign for Breast Cancer Awareness in 2014 and again in 2015.

“We receive many compliments from our customers on our footwear policy and even more during Breast Cancer Awareness Month,” states Ryan Bradbury. “We wear the Pink ShuBees during the entire month of October in support of this great cause.”