Over the past two years, Seattle Seahawks running back Marshawn Lynch attracted the media’s attention for more than just his skills on the football field. Notorious for his short, unhelpful answers during interviews with reporters, Lynch has become a sore spot for National Football League (NFL) officials. 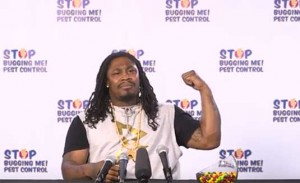 For skipping out on interviews with the press, the NFL fined him the maximum it can demand from an individual — $50,000 — on two occasions, The Atlantic reports.

To avoid additional, more serious fines, Lynch started showing up at Media Day events. But despite his participation, members of the media still didn’t get the cooperation they craved. Simply responding with a passive, “You know why I’m here,” or ever-so-helpful yeahs and nopes, Lynch has continued to anger sportswriters seeking useful information and insightful commentary.

A Seattle-based pest management company with a great sense of humor thought they could have some fun with his reputation.

In a commercial for Stop Bugging Me Pest Control, Lynch is seen avoiding questions at a press conference with his new catchphrase, “Stop bugging me.” The clip includes serious and ridiculous questions that poke fun at the entire Media Day spectacle.

Not a bad idea, right? The company points outs in a press statement it released that it takes pest-related issues seriously and that this commercial is its way of putting a little fun into its advertising campaign.

Check out the entire commercial below.