To kick off day three of PestWorld, outstanding members of the industry were recognized for their dedication, innovation and impact on the industry. 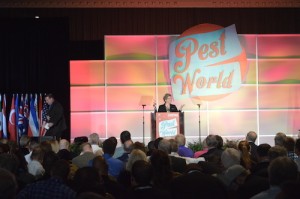 In addition to the awards, this general session assembly included someone who is accustomed to overcoming challenges—Alison Levine.

Levine is known for leading the first American Women’s Everest Expedition and for completing the Adventure Grand Slam—climbing the highest peak on each continent and skiing to both the North and South Poles.

In 2002, after spending nearly two months on the mountain, Levine and her team had to turn around just a few hundred feet shy of the summit of Everest due to weather.

Levine returned to the mountain in 2010 to honor her friend, Meg Berté Owen and reached the summit, completing her Adventure Grand Slam.

While recounting her adventures climbing Mount Everest, Levine contiuned to tie her adventures back into business strategies. Such as explaining that backing up does not mean backing down, and that sometimes that backtracking ennables you to regroup and come back stronger than ever.

After all of her insights, there was one she emphasized: “Fear is okay, complacency is what will kill you.” You have to be able to adapt and change with your environment.

To say the least, Levine left the room with an electric feeling.