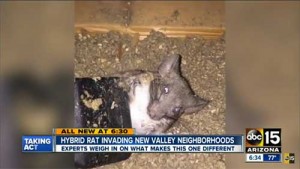 With traits similar to both roof rats and pack rats, these new hybrid rats are causing damage in Arizona. Photo courtesy of YouTube.

A new hybrid rat has been cropping up in valley neighborhoods of Arizona, reports a local abc affiliate.

Though not scientifically identified as a subspecies, the new hybrid rats match traits of both roof rats and pack rats. Opposed to their purebred counterparts, the new hybrids have large ears and short tails.

Pack rats generally live on the ground and have shorter, furry tails and smaller ears, while roof rats have long hairless tails and live in trees and attics. Pack rats also like to make nests in shrubs, and roof rats tend to travel along telephone wires and power lines.

Both roof rats and pack rats need to chew on items in order to keep their teeth from getting too long, which makes them especially destructive.

Along with pack rats, the new hybrids have been known known to get into vehicles and engine compartments and cause major damage.

To learn more about roof rats, check out this in-depth look by Dr. Stuart Mitchell.

Get to know your commensal rodents