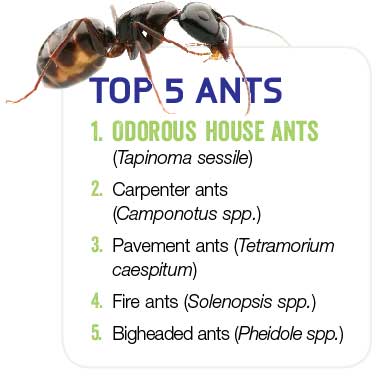 To tweens, this might refer to a beloved boy band (before one member’s departure this summer, anyway). But PMPs know the only quintet truly worth making a fuss about is comprised of ants, bed bugs, cockroaches, rodents and termites.

Quick: Grab one of your technician’s schedules for the week. Does the roster include an ant visit, a rodent visit, and a bed bug visit? Maybe a cockroach cleanout or a termite inspection? All of the above?

It’s no secret that these five pests take up a good chunk of pest management professionals’ (PMPs’) time and effort on a daily basis. There will always be exceptions, of course — some companies steer clear of termites and other wood-destroying insects and organisms (WDI/WDOs), while others specialize in them, for example. But from the annoyance customers feel when they spot ants in their homes to the panic they endure when they realize bed bugs have taken up residence, and every emotion in between, these Top 5 have been mainstays in the industry.

As we made abundantly clear in our cover story last month (“Ants: Public Enemy #1”), most customers loathe ants. They might still be freaked out about bed bugs or lament the cost of termite damage, but a trail of ants on their kitchen counter can make their blood pressure skyrocket.

That’s where PMPs come in. They assess the situation and devise the optimal control strategy. However, that’s often easier said than done. Is it an odorous house ant situation, which happens to be the species ranked No. 1 in distribution this year? Or is it a carpenter ant infestation, which ranks No. 2?

Fire ants, particularly the red and the black imported species, are considered more of a regional issue. Yet they rank No. 4 in our survey for prevalence, as milder temperatures push them ever-farther north in the United States (pavement ants rank No. 3).

According to eXtension.org, as of May 2015 Solenopsis invicta and Solenopsis richteri “currently inhabit all or parts of Alabama, Arkansas, California, Florida, Georgia, Louisiana, Mississippi, New Mexico, North Carolina, Oklahoma, Puerto Rico, South Carolina, Tennessee, Texas and Virginia. They are also discovered sporadically in Kentucky, Missouri and Maryland.” Will a Pest Management Professional (PMP) State of the Industry report in the not-so-distant future feature fire ants in Maine? Stranger things have occurred. 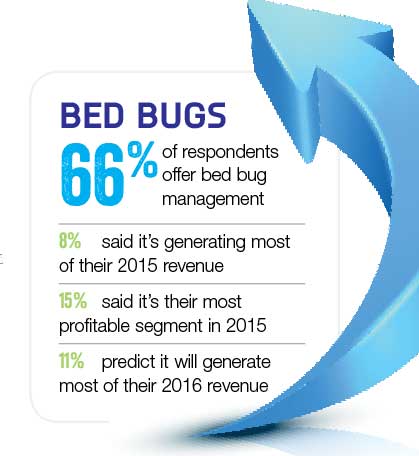 PMP’s 2015 Bed Bug Management Survey took center stage in our July issue, and the pests naturally were a recurring theme in the answers from our survey respondents. Ten percent of them even cited bed bugs as the top opportunity for their companies in 2016, while 21 percent named Cimex lectularius as the pest most likely to make the biggest resurgence next year.

Resurgence? Haven’t bed bugs been front and center in the media — and the topic of desperate pleas from customers — for more than a decade? It doesn’t matter. After a generation of being barely encountered, they are now popping up in public libraries, hotels, buses and homes with more regularity, cementing their status as a mainstay pest. 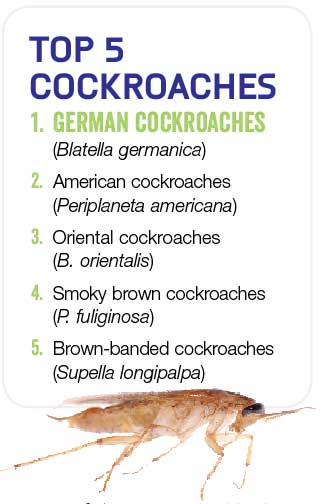 PMPs always make the best restaurant companions — they’re deft at taking their guests to a place where the roaches are kept to a minimum.

Several good products are on the market to take care of this pest; the trouble over gaining control is often failing to manage customers and their sanitation habits. Still, they can be a profitable pest segment: 10 percent of respondents report cockroaches as their No. 1 profit center in 2015, and 9 percent predict they’ll be No. 1 in 2016. 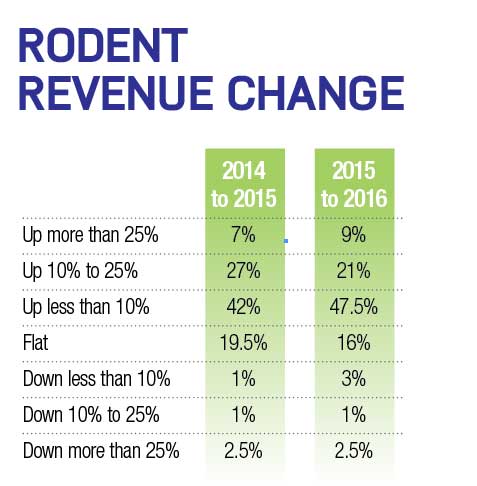 When you think “rodent job,” chances are you immediately picture a house mouse, Norway rat or roof rat. You’d be right on the money with the Top 3 prevalent rodent species, according to this year’s survey.

But it may be time to expand your mental photo album to include deer mice, meadow mice, voles and more. In July, the U.S. Environmental Agency (EPA) expanded rodenticide label language to include non-commensal rodents (including the aforementioned species, as well as others) as target pests. This paves the way for PMPs to market their rodent control strategies to a new audience of barn owners, landowners, etc.

And don’t forget moles. Consumers, faced with a glut of old wives tales and gimmicky do-it-yourself products, often end up turning to a professional to get the problem under control once and for all. While just 7 percent of respondents name rodents as their top earning pest segment in 2015 (a similar figure forecasted for 2016), the right target marketing campaign could make that number scamper up the charts in the year ahead. 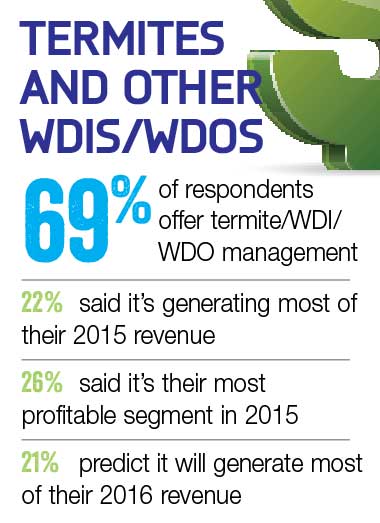 Wood-destroying pests are truly a breed apart in the professional pest management industry. Some PMPs thrive on termite work, whereas others walk quickly away from it. Location — both in pest population density and local regulation density — plays a large role.

Yet it seems the more we learn about termites, the less we really know about them. Look no further than a study published in the Aug. 31 edition of the Proceedings of the National Academy of Sciences. It found that termite mounds have ventilation systems that rival state-of-the-art architecture. “The structures act similarly to a lung, inhaling and exhaling once a day as they are heated and cooled,” marvels a press release on News.Harvard.edu. The study involved an unnamed termite species in India, but the implications are immense: Could the next office your company moves into take advantage of heating and cooling systems that termites already have mastered?

Give us your take on the state of pest management