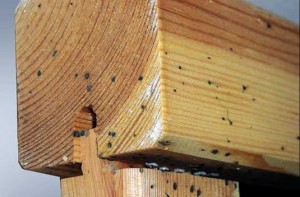 After an inspection and dismantling of the crib, numerous bed bugs, eggs and fecal stains were found. Photo: Paul Bello

Consider how remediation work can be life-changing.

Since my start in the industry as a licensed applicator and technician in 1976, I’ve performed a lot of pest management work. But one job in particular stands out: A large apartment complex had been referred to me by an industry colleague. During my initial conversation with the manager, I learned the property had been experiencing a bed bug situation for at least four years and it had worsened. By the time he contacted me, it was on its fourth pest company.

We discussed the situation and agreed on a plan of action for the necessary remediation work. Soon after, I was on location — and up to my neck in bed bugs. It was immediately clear the problem would never be eliminated if the work being done were allowed to continue in the manner observed. The efforts were haphazard, ineffective and not working.

I began by inspecting the facility. The apartment complex was large, and hundreds of units were infested with bed bugs. The infestations varied from very light, where just a few bed bugs were present, to severe, where the apartment was a video-worthy bed bug ground zero.

Like any apartment complex, some units were neat and clean, while others — not so much. Except for the sheer volume of bed bugs present, the account was similar to numerous others I had visited in the past as far as the living conditions observed.

However, during my inspection of one particular apartment something occurred that I will never forget. The incident set the tone for my future bed bug work. It was such an influential moment that I included it in the first few pages of my book, The Bed Bug Combat Manual, to help others adopt a similar mindset with their own bed bug work.

After entering the modestly furnished apartment, I was struck by how neat, clean and orderly it was. It was a literal “you can eat off the floor” type of home. A young woman and her infant son were home when I arrived. The bed bug problem in this apartment was obvious because of the numerous visible bite marks on the woman’s arms and on the baby’s arms and legs.

When I spoke with the woman, her despair was apparent. She explained that, despite her best efforts to keep her home clean, she could not prevent her baby from being bitten by bed bugs. She didn’t know where they were coming from or how they were able to get to her family. She was doing the best she could, but nothing was working. With her baby in her arms and tears in her eyes, she explained it to me.

The experience was not easily forgotten. It was an encounter that has shaped my perception of bed bug management to this day.
I promised the woman we’d take care of her problem.

Since that time, I’ve done bed bug remediation projects at many locations. I’m continuously surprised by how one pest can adversely affect so many rational people in deeply emotional and psychological ways. From speaking with bed bug victims, I’ve come to understand that sometimes it’s not the bed bugs themselves, but underlying personal issues bugs bring to the surface.

When work feels overwhelming or too difficult, I always remember this woman and her infant, as well as the many other bed bug victims I’ve encountered. It was an experience that serves as a reminder that folks like these are counting on us to save them from bed bugs. From then on out, the tone was set — and set in stone.