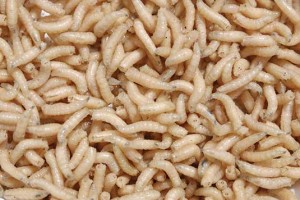 It’s not easy to kill fly maggots. However, they eventually move on to the pupal stage and then develop into flies. Photo: ©istock.com/fiulo

Q: A woman died in an apartment complex I service. She was dead for nine days before someone found her. Now a neighbor is complaining about fly maggots crawling into his unit. I’ve been asked to do something about it but can’t find a pesticide registered for maggots. What should I use and what do you think the results will be? — Tom S., Tennessee

A: Fly maggots are difficult to kill. I don’t know of anything registered for them, either. I don’t think you can do much in this situation. The maggots are looking for places to pupate. In a few days you’ll have adult flies in the affected units. The source is gone so the problem will solve itself. You might suggest the apartment complex supply affected neighbors with some cans of flying-insect spray.

Q: I have what has been identified as Hypoponera ants in a hospital kitchen. They are winged, and the staff are complaining about bites. What can you tell me about these ants and how to control them? Do they bite? What baits are best? The kitchen is above a basement but I can’t find any ants there. [Author’s Note: Additional investigation found that part of the kitchen is on a slab.] — Dave K., New York

A: Hypoponera ants are tropical, but they have appeared in New York and Connecticut. They are soil nesters and were likely brought in with potted plants. The workers are seldom seen but the winged females have stingers and sting (not bite). Because you probably won’t find workers, control is similar to controlling citronella ants. Baits won’t work because the workers are not foraging above ground. You’ll need to drill the slab and inject a termiticide beneath it. This usually works but I wouldn’t put a guarantee on it. You might need some retreatments to gain complete control.

Q: This is the season for voles in my area. In the past, I haven’t found anything registered for them. I’ve heard that some rodenticides will work. What’s available at the moment? — John B., Illinois

A: In states that do not require the target pest to be listed on the label, rodenticide blocks have worked well during winter months. For the rest of the year, however, voles usually ignore these baits until their usual food (grasses, etc.) disappears in the cold weather. Then they find food by gnawing on the bark of shrubs. Unfortunately, this can kill the shrubs.

A recent regulatory change allows voles to be listed on some rodenticide labels, so even states that require the target pest be on the label can accommodate this method of control. Talk with your distributor or manufacturer reps about what might be available in your service area.

Q: A homeowner has a drain fly problem under her bathroom slab. The tub is not on the slab. But there’s soil and some gravel under the tub. She wants to know how much soil should be removed? I’m not sure how to advise her. — Bill W., Oklahoma

A: Drain fly and Phorid larvae tend to migrate upward and attach the pupal cases to the underside of the slab. This will give you a pretty good idea of the area involved with the infestation. Under the tub, the pupal cases will be attached to the tub or on the top layer of gravel. Depth will depend on how far down the contamination seeped.

Email your questions about insect identification and pest management technologies and techniques to Dr. Doug Mampe, an industry consultant, at dentomol@aol.com. Your questions most likely will be printed and answered in one of Pest Management Professional’s upcoming Ask the Expert columns.

Hold these SPP truths to be self-evident