Museum’s Antique Mouse Trap Can Still Do Its Job 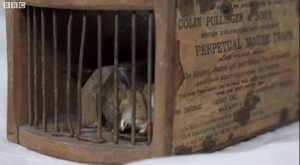 They just don’t make things like they used to in the 1800s.

This is certainly the case for the Perpetual Mouse Trap, patented by Colin Pullinger & Sons in 1861. According to Popular Mechanics, this antique trap was on display at the Museum of English Rural Life (MERL) in Berkshire, UK, when it caught a mouse without any bait. Not bad for a trap that is more than 150 years old.

Apparently, an assistant curator at the MERL was the one who made the discovery that the trap still works to this day. Even funnier still, a phrase written on the outside of the trap just received validation and then some: “Will last a lifetime.” I’d say so.

These mouse traps are centered around a seesaw mechanism that allows it to be a multiple-catch trap for mice. When a mouse smells bait from outside the trap, it crawls into the entrance hole onto a beam. Then the mouse is forced to go left, triggering the seesaw in the same direction, thus trapping the mouse. Now that the mouse cannot return to the entrance, it must go further into the trap. Here it will go through another one-way gate, trapping the mouse and allowing the seesaw at the center to rock back to its original position. And ta-da, it’s ready for another unlucky rodent.

Staff at the MERL has yet to decide what should be done with the dead mouse. However, there is one idea floating around to have the mouse taxidermied and displayed along with the trap.

Good luck getting that kind of life expectancy out of anything made today.

Place mouse glue board on top of MCT