Why Rescue Robots Should Be Modeled After Cockroaches 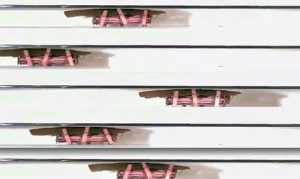 When it comes to thinking of new methods of rescue in response to disasters such as earthquakes and structural collapses, some scientists are looking to cockroaches for inspiration.

It makes sense, especially considering their collapsible exoskeleton and speed. Did you know that cockroaches are fast? The American species moves at 50 body lengths per second, which equals about 210 mph for a running human.

Robert Full, a professor of integrative biology at UC Berkeley, and his colleague Kaushik Jayaram, who recently obtained his Ph.D. from UC Berkeley and is now a postdoctoral fellow at Harvard University, are the minds behind this idea. Their idea is starting to gain traction. Their paper about this concept was even recently published in the Proceedings of the National Academy of Sciences.

So let’s take a look at why this is a plausible idea.

During their experimentation, Full and Jayaram found that cockroaches could fit into a space less than a quarter of their height by collapsing their exoskeletons nearly in half, spreading out to the sides. Surprisingly this only takes about a second and barely slows them down. Experiments also revealed that these cockroaches can withstand almost 900 times their body weight without getting hurt. Not bad characteristics to model a rescue robot after.

These skills led scientists to buildd CRAM, which stands for Compressible Robot with Articulated Mechanisms. The hope remains that these tiny robots will one day be used to find disaster survivors. Who knows, maybe this will be an invaluable tool in disaster rescue one day.