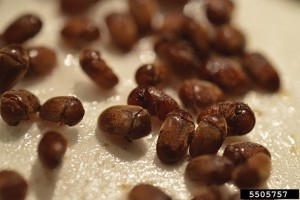 Q: We found a cigarette beetle problem in a conference room. A thorough inspection failed to locate a source. We’ve inspected adjoining rooms, but haven’t found anything. We did find beetles in the conference room’s drop ceiling, however. Above the room is an office that belongs to another tenant, but we don’t have access to it. Could that be the source? If so, how can we treat it? — FRANK D., NEW YORK

A: If you can’t find a source inside the conference room and none in adjoining rooms, then I agree the source is likely the office above the drop ceiling. You must find a way to gain access to this office and inspect it. If a source is found, negotiate a treatment with that tenant or have their pest management company (if they have one) eliminate the problem. This could be a sales opportunity.

Q: A customer is finding what looks like small bagworms on the side of his house. The “bags” are gray, and look like they are made of silk. The homeowner also finds them inside once in a while. What are they, and how do I control them? — PHIL N., LOUSIANA

A: I suspect they are plaster bagworms (Phereoeca uterella). They feed on a wide variety of animal matter, including silk and wool. When found on houses, they are usually associated with infestations of spiders in the eaves.
The bagworms feed on dead insects in the spider webbing (a dicey venture) and on the silk itself. They will also feed on dead frogs, lizards and other small, dead animals. They get their common name because when houses had real plaster walls, the plaster often contained horsehair, and the bagworms fed on the horsehair. They’ll feed on wool carpets, but they aren’t really fabric pests like clothes moths.

Control is difficult, because the bags protect the larvae from pesticides. A good contact spray will give you some kill, however. Get rid of the spiders and their webbing first to reduce the problem. Make sure exterior doors on the house have good threshold seals to physically keep them out.

Q: We treated a house for subterranean termites two years ago. We applied a nonrepellent termiticide around the exterior perimeter. The house is on a supported slab, and all of the floors are hardwood over concrete. Last year, termites showed up in the hardwood in a spot between two rooms. We lifted the hardwood, and drilled and treated beneath the slab. This year, termites showed up again — 5 ft. from last year’s infestation but again, between the same two rooms. Before we lift flooring and drill again, why do you think we had reinfestation? How do we prevent it? — RAY N., NEW JERSEY

Email your questions about insect identification and pest management technologies and techniques to
Dr. Mampe at dentomol@aol.com. Your questions most likely will be printed and answered in one of
Pest Management Professional’s upcoming Ask the Expert columns.

3 tips for tracking down subterranean termites