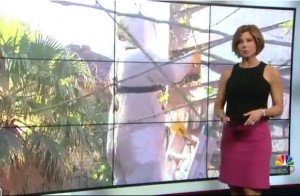 A large hive recently was removed from inside the exterior paneling of a house in Houston, according to KPRC Click2Houston.

The hive reportedly formed in a crack inside exterior paneling, and was bothersome to the owners and neighbors. The family’s mother and the children in the home said that they had been stung numerous times.

Claude Griffin of Gotcha Pest Control was called to remove the hive, and has previously removed several hives for the family in the past, reported the television station. This time, nearly 50,000 bees and 50 pounds of honey were extracted. The bees were vacuumed into a breathable holding container and will be transported to a beekeeper to continue to make honey.

Griffin told KPRC that pest control companies are expecting to have a busy summer with bee removals in Houston.

“The bees are free now, they can roam and they’re going to be stronger than ever,” Griffin said. “They’ve got all this pollen to take in.”

As you start getting ready for stinging pest season, consider these tips to help make it as easy and stress-free as possible.