Map shows where cicadas will emerge this spring

Billions of Brood V periodical cicadas in the eastern United States will emerge over the next several weeks after living underground for 17 years.

Periodical cicada nymphs develop underground by feeding off the roots of plants. Mature cicada nymphs will emerge from underground at about the same time in large numbers, and then molt into winged adults, according to Ohio State University’s department of entomology.

Adults don’t feed much during their two- to four-week lifespan. The infamous cicada “songs” are produced from the male’s vibrating membranes under their abdomen, which attracts silent females for mating. After mating, females etch slices into twigs to lay their eggs. (Females can lay up to 400 eggs in 40 to 50 twigs, the department website says.) The eggs will hatch between six to 10 weeks, and those nymphs fall and burrow six to 18 inches underground for yet another 17 years. 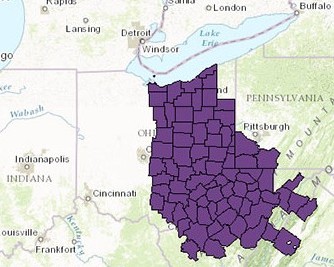 The United States Forest Service (USFS) has provided an online map that shows periodical cicada distribution and expected year of emergence by cicada brood and county. This county-based data, compiled by the USFS Northern Research Station, depict where and when the different broods of periodical cicadas are likely to emerge in the United States through 2031.

Seen in the map to the left, Magicicada septendecim (L.), M. cassini (Fisher), and M. septendecula (Alexander and Moore) Brood V periodical cicadas will emerge in parts of Ohio, Pennsylvania, Virginia, West Virginia, Maryland and Long Island in spring of 2016. The last time they emerged was 1999.

Dr. Doung Mampe, a Pest Management Professional contributor and industry consultant, previously shared how to deal with this pest:

Stopping cicadas from emerging is like trying to stop a hoard of locusts (grasshoppers). They live underground for 17 years and feed on sap from tree roots. Treating the soil around a customer’s house probably wouldn’t stop emergence because these big insects could burrow through an insecticide barrier. Even if you could stop them from emerging on your customer’s property, they’ll fly in from neighboring properties. The adults only live for a few days, but new adults emerge every day. There’s not much you can do but live through it.

Cicadas don’t bite. The females crawl out toward the ends of tree branches and make slits in the branch ends in which to lay eggs. Often, the small branch ends break off because of the slits, but that doesn’t cause significant damage to the tree unless it’s a fruit tree and you’re dropping blossoms.